KT Corp., the country’s biggest fixed-line service operator, said Thursday it will use optical cables to meet the communications demands of the Daegu World Championships in Athletics to kick off on Saturday.

As the main telecommunications service provider for the global sports event, KT will equip the area with about 3,500 circuits, split into 72 strands, which will be used for broadcasts, fixed-line phones and Internet services for the nine-day competition in Daegu.

“The optical cable enables us to deliver the broadcasts to the worldwide audience in unbelievable speed ― only 0.1 second,” said KT officials. 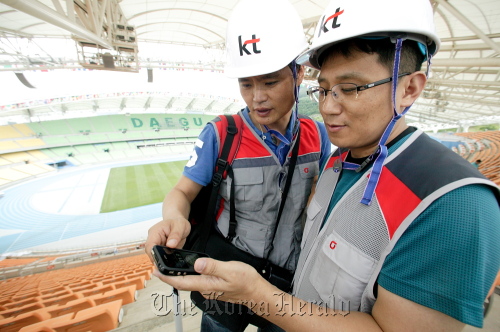 Two KT officials check wireless Internet services at the main stadium for the Daegu World Championships in Athletics in Daegu, northern Gyeongsang Province, earlier this week.
Live shots of the sports games at Daegu will be delivered from the telecom center in Daegu Stadium to the global communications center at KT’s office in downtown Seoul to the United Kingdom, the United States and Japan, company officials said.

About 3,500 athletes and officials from 212 different nations will participate in the sports festival.

All broadcasts will be provided on high definition screens and 3-D pilot broadcasts are also scheduled to take place Aug. 28-30.

People will be able to tune in to two channels ― KBS and Skylife HD ― to watch the 3-D broadcasts of Usain Bolt, according to KT officials.

Live 3-D broadcasts will be provided for 17 different events, including the men and women’s 100 meter and 400 meter races, as well as the semifinals of the track competition, officials added.

For wireless services, the company constructed a system which allows 3,500 people to simultaneously make voice calls and KT’s wireless broadband network is expected to take up to 1,000 people at one time.

“It’s now a smart era where all crowds who come to watch the games are camera men and reporters,” said KT chairman Lee Suk-chae.

“KT will put its utmost effort into creating a telecommunications system which enables people to see and hear the sports competitions in a vivid matter.”

With its strength in the construction of wireless internet hotspots, it built a total of around 430 Wi-Fi zones within the area, including the main sports stadium, athletes’ dormitories and along the marathon routes.

The establishment of Wi-Fi zones could have up to 60,000 connected to the wireless internet at a single period, its officials said.

“The one-person media outlets could offer their insights on the sports games wherever they are located within the stadium and even when they are running along the marathon course with their smartphones,” KT officials said. “We’re determined to show the world the advanced aspects of Korea’s information technology services and the company’s mobile wonderland scheme through the event.”

A total of 11 IT support staff will be dispatched throughout the event and around 130 telecommunications support agents will take care of system operations and meet emergency needs, said KT officials.

In addition to the company’s IT support plan, it is also planning to invite 50 children from multicultural families, along with unprivileged homes, on Sunday for them to seat the men’s 100 meter finals in the stadium’s first-class seats.

In prior to the international competition, KT has acted as the main network service operator of a number of global events in the past.

The service was given in 14 different languages and the global teams were able to watch news in their native languages even at their hotel and while they were on-the-go.

The company has also served as the main communications service operator in many other international meetings and events over the past, such as the Seoul Olympics in 1988, the Asia-Europe Meeting in 2000, the FIFA World Cup and the Busan Asian Games in 2002 and the Asia-Pacific Economic Cooperation in 2005.

It acted as the official partner of FIFA during the 2002 FIFA World Cup, jointly working to build up and enhance the country’s image and it will again oversee the telecommunication operations for the Pyeongchang 2018 Winter Olympics, equipping it with the firm’s strong fixed-line and wireless networks and advanced technologies, KT officials said.

KT is also known as the first telecom firm in Korea that opened the era of smart devices by introducing the Apple’s iPhone in November 2009. Since then, a number of smartphones and tablet PCs along with smart 3-D TVs have flooded in from abroad and many have been developed by local manufacturers, such as Samsung and LG Electronics.