Back from two weeks’ vacation and making his first TV appearance since a threat against his life was posted on a jihadist website, the “Late Show” host played it for laughs during Monday’s monologue. 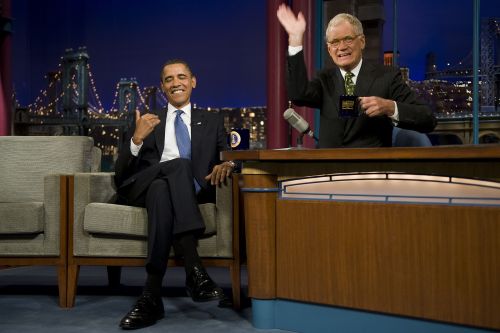 “Tonight,” he said, “you people are more, to me, honestly, than an audience ― you’re more like a human shield.”

Then he apologized for having been tardy coming out onstage.

“Backstage, I was talking to the guy from CBS,” he explained. “We were going through the CBS life insurance policy to see if I was covered for jihad.”

Until Letterman delivered his jokes, his situation seemed no laughing matter.

Last week, a frequent contributor to a jihadist website posted the threat against Letterman. He urged Muslim followers to “cut the tongue” of the late-night host because of a joke and gesture the comic had made about al-Qaida leaders on his CBS show earlier this summer.

“A guy, a radical extremist threatened to cut my tongue out,” Letterman marveled during Monday’s monologue. Then, referring to his disastrous turn hosting the 1995 Oscarcast, he added, “I wish I had a nickel for every time a guy has threatened (that). I think the first time was during the Academy Awards.”

“And so now,” he continued, “State Department authorities are looking into this.” But they could save themselves some time: “Everybody knows it’s (Jay) Leno.”

Along with his monologue, Letterman mined the situation for his Top Ten List: “Top Ten Thoughts That Went Through My Mind After Hearing about the Threat.”

One joke that may have helped spark the fatwa was one of several lampooning al-Qaida in Letterman’s June 8 monologue. This was just days after the death of al-Qaida leader Ilyas Kashmiri, who was killed by a U.S. drone strike in Pakistan. Though Kashmiri was rumored to be a long-shot choice to succeed Osama bin Laden, he wouldn’t have worked out even had he lived, Letterman cracked, pointing to Kashmiri’s “rocky start” as a front-runner: “He botched up the story of Paul Revere.”

The real butt of that joke: Sarah Palin, potential 2012 GOP presidential candidate, who in early June on her “One Nation” bus tour had claimed that Paul Revere’s famous ride was intended to warn British soldiers as well as his fellow colonists.

The website contributor, who identified himself as Umar al-Basrawi, railed in his post that Letterman had referred to both bin Laden and Kashmiri and said that Letterman, in discussing Kashmiri’s death, had “put his hand on his neck and demonstrated the way of slaughter.”

“Is there not among you a Sayyid Nosair al-Mairi ... to cut the tongue of this lowly Jew and shut it forever?” Al-Basrawi wrote, referring to El Sayyid Nosair, who was convicted of the 1990 killing of Jewish Defense League founder Meir Kahane. Letterman is not Jewish.

Al-Basrawi, considered likely to be an alias, has made some 1,200 postings to the Muslim website, according to Adam Raisman, an analyst for the Site Monitoring Service. The private firm, part of the Site Intelligence Group, provides information to government and commercial clients on what jihadists are saying on the Internet and in traditional media. Raisman said the online forum is often used by al-Qaida.

The FBI said last week that it was looking into the threat.

While Letterman and his writers were polishing their jokes Monday afternoon, outside, a bomb-sniffing dog was led around the periphery of the Ed Sullivan Theater in midtown Manhattan. Meanwhile, ticket-holders queuing up along Broadway seemed relaxed about attending Letterman’s first taping since the assassination threat. Some were even unaware that his life had been threatened.

“I’m not worried. They’ve got metal detectors,” said Kendall Phillips, a 25-year-old from Houston, noting a standard provision in the TV world for screening audience members. “Plus, it’s like really hard to get tickets.”