However, increasingly common use of such devices in taxis has also given rise to privacy issues.

The drive to fit taxis with such devices was first initiated by Incheon city government in 2008. Since then, other major cities across the country including Seoul and Busan have followed suit.

As a result, more than 50,000 of Seoul’s 72,000 taxis are fitted with black boxes, while Incheon and North Jeolla Province have fitted all taxis in their jurisdictions with such devices. 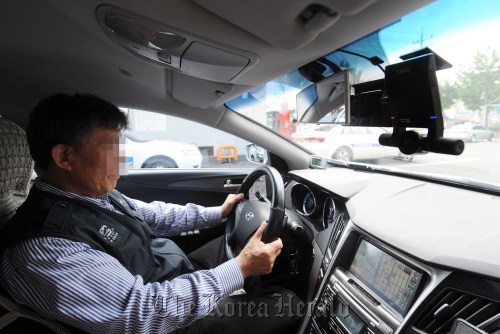 The number of taxis equipped with black boxes is on the rise amid concerns about privacy infringement. (Lee Sang-sub/The Korea Herald)
According to the Agency for Technology and Standards’ definition a black box or accident data recording system, needs to be able to record various information including video, speed and direction of vehicle and whether or not brakes were engaged at the time of the accident.

With such functions, experts and concerned organizations have high expectations of black boxes.

According to Korea Transport Institute’s estimates, the number of car accidents could be cut by as much as 30 percent if all automobiles on the roads were equipped with black boxes. Under this scenario, the Korea Transport Institute expects fatalities from car accidents to be cut by between 800 to 1,600 and related costs to be reduced by up to 3 trillion won on an annual basis.

With such research supporting the usefulness of black boxes, some lawmakers have suggested making such devices a requirement in all new cars.

On July 26, Rep. Lee Sang-min of Liberty Forward Party put forward a motion to revise the Traffic Safety Act to make it compulsory for carmakers to fit black boxes in all new vehicles.

However, some of the more advanced devices available on the market allow audio and video recordings of the vehicle’s interior to be made, with about 10,000 black boxes used in Seoul taxis thought to have the function.

“I think it is definitely a breach of privacy in privately owned taxis, as only the driver has access to the recordings and I don’t know what they may be used for,” a 29-year-old female university tutor said, declining to be named.

“If something was to happen to me while I am in a taxi and if it was all recorded, the data could be used against me in some way. I think many women would feel the same way.”

It is not only women who find the thought of being videoed without their knowledge or consent unsettling.

“I can understand where the taxi drivers are coming from, and I hear that there are fraudsters who try to frame taxi drivers for sexual harassment and other crimes to get money,” Jun Min-suk, a 31-year old Seoul citizen said. He added that while such concerns are understandable, taxi drivers should be prevented from posting videos online.

“I can see that the black boxes are meant to protect the drivers, but I think a sign that tells passengers that they are being videoed must be placed in taxis to let the passengers know.”

While taxi operators argue that recordings of the interior can be used as evidence in cases where a crime takes place inside the taxi, some taxi drivers have posted footage of particularly difficult or unreasonable passengers on the internet.

One such video posted last year even became one of the top search words on the nation’s largest portal sites, supporting those against taxis being fitted with black boxes capable of recording the interior.

Despite such goings-on, the authorities at present have no real way to penalize taxi drivers who distribute such videos.

Although guidelines regarding the use of data gathered by black boxes were introduced in December, the guidelines are not legally binding, leaving those affected to take action against those responsible.

Although laws prohibiting audio recordings being made inside taxis, and making it compulsory for taxi drivers to inform passengers that a recording is being made, have been passed, they will not become effective until Sept. 30, according to the Ministry of Public Administration and Security.

Many taxi drivers do not agree that recording inside the vehicle is an invasion of privacy.

“What about taxi drivers’ rights? We get all sorts in the taxis. Drunken customers younger than my son have sworn at me and some people refuse to pay and even hit drivers,” Park Min-gu, a taxi driver in his 50s said.

“About putting things on the internet, most drivers I know wouldn’t even know how, and even those who do know how won’t do it for the fun of it.”

Taxi drivers are not the only ones defending the use of black boxes capable of recording the inside of the vehicle.

“When I think about it, I don’t like being recorded. But, all in all I think it does provide some protection for the passenger and the driver as everything is being recorded,” Shin Ji-young, a 33-year old office worker living in Seoul said.

“I think as long as I am not doing anything wrong in the taxi, the driver would have no reason to distribute the recordings.”