TEHRAN ― For Koreans, Iran is quite an interesting country where Korean-made electronics goods and automotive products have carved out a significant market share and Korean dramas have gained enormous popularity.

Unlike the general expectations, anti-American sentiment was not prevalent among most people here. Those in the political circles, however, apparently bear grudges against the U.S., which has long maintained economic sanctions against the country for pursuing nuclear technology that Washington suspects is intended to make weapons of mass destruction.

During a weeklong press tour, organized by the Iranian government last month, a South Korean media contingent was able to get a first-hand look at Iranian culture and society, which have not been well-known to the world, probably because of international isolation over its nuclear program. 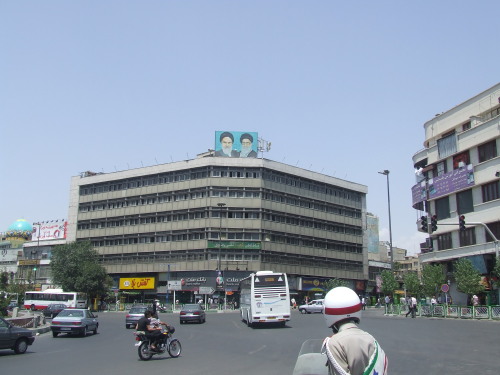 Downtown Tehran
Looking at street banners and billboards that advertised South Korean products, the nine journalists could feel the strong presence of South Korea in this Middle East nation.

Electronic appliances manufactured by LG and Samsung were everywhere. Hyundai and Kia are also performing well in the country’s automotive market.

“Korean electronics companies have ranked first or second in the Iranian market. The import sanctions on products made in the U.S. might have affected the sales of the Korean products here, although it is true that the quality of Korean merchandise is very high,” said Mohsen a 32-year-old office worker.

“Its economic development and cutting-edge technology is astonishing. I believe South Korea will capture the world market in the next few years.”

Iran is a weighty trade partner for South Korea in terms of trade volume. Last year, their trade amounted to some $11.5 billion worth.

The Korean wave, or hallyu, has also made significant forays into Iran. Korean period dramas, “Jumong” in particular, were smash hits. Jumong ― the founding monarch of Korea’s ancient Goguryeo kingdom (37 B.C.-A.D. 668) ― has become the most popular TV drama representing Korea here, with its viewer ratings hovering around 80 to 90 percent.

“The two countries have many things in common from the cultural standpoint. As they do, Korean women used to wear long skirts and headscarves similar to hijabs. Historically, we have also been invaded by outside forces many times as Iran has been,” said Chang Byung-ock, Iran expert at Hankuk University of Foreign Studies.

“Such historical and cultural similarities were shared through Korean dramas, which might have greatly appealed to the Iranian public.”

Despite such a great potential for economic and cultural exchanges, experts voiced concerns that they could be restricted by the chilly ties between the U.S. and Iran.

South Korea, the key Asian ally of the U.S., has joined the international sanctions spearheaded by the U.S. to punish Iran for its nuclear development despite Iran’s persistent claims that it is peaceful.

“Economic exchanges and cooperation between South Korea and Iran would hinge on the U.S.-Iran relations. We cannot help but join the sanctions as a U.S. ally. We just hope that the relations will improve,” said professor Chang.

What has also drawn the attention of the press contingent was that American culture and products have been loved by young Iranians who appear to hold little grudge against the U.S. which has been at the vanguard of the sanctions against Tehran.

“I like their products, which are of high quality ― jeans, cars and so forth. The only problem is their high prices,” he said, holding a Coke can in his right hand.

“I know (that the U.S. has imposed sanctions on us), but positive thinking is important. Life isn’t just a heaven. There could be advantages or disadvantages for all to go through.”

Prof. In Nam-sik of the Institute of Foreign Affairs and National Security said the western appearance of Iranian youngsters appears to stem from the “inertia” of the secularization which was widespread before the 1979 Islamic Revolution that brought down the pro-U.S. Pahlavi Dynasty.

“Even after the revolution, such inertia and desire for freedom and western culture have lived on. What their father generations had enjoyed apparently has been passed on to their children,” he said.

Still, the country is not without an expression of anti-American sentiment. Some street banners read “Down with the U.S.,” and front pages of state newspapers carry articles about a U.S. spy drone shot down by Iran

“Sanctions are inhumane and unlawful policies. Why do our citizens have to undergo such sanctions whey they did not anything wrong? It is our citizens’ right to use nuclear technology peacefully and for medical purposes,” said Foreign Ministry spokesman Ramin Mehmanparast in a meeting with Korean journalists.

“The U.S. appears to keep making one excuse after another (against Iran). First, it takes issue with our nuclear technology, then human rights, then democracy and then such matters as the same-sex marriage. Why is the U.S. pushing us (to make us go in its direction)?”

Because of difficulty in getting U.S. visas or for some other reasons, Iranians feel the U.S. is still an “unreachable” country.

“It is very hard for Iranians to obtain the U.S. visa unless you are students hoping to study there. Even if you have the visa, the exchange rate is too high, the cost of living there is too expensive. For me, the U.S. is unreachable,” Roham, a 36-year-old worker, said.

To the eyes of the Asian journalists, the fact that many women have professional jobs in this seemingly conservative Islamic society was also quite interesting.

Hedyeh Seyfikar, 31, is a sound engineer at a state radio station. She has a 2-year-old daughter who goes to the state nursery while she is at work from 8:30 a.m.-4 p.m.

“It is something common. Muslim women in Iran, they have no problem working,” she said.

More than 60 percent of university students are women. In the Iranian media industry, more than half of the employees are female.

Before the Islamic Revolution, parents were unwilling to send their daughters to university, where the American culture was widespread, according a government official. But after the revolution, Islamic leaders began encouraging women to play a role in the society.