Sometimes South Korea and Japan go for a couple of years without meeting on the soccer field but for spells, the two neighbors are rarely apart. The current crop of players are becoming more familiar with each other all the time as Wednesday’s match in Sapporo will be the third in the past 10 months and the fifth in the past 18 ― most league teams don’t face each other as often.

The matches tend to be fairly even. The last one was the sole Japanese victory of the recent four meetings, though Korean fans would point out that they won only after a penalty shootout. The semifinal clash in January was the most thrilling match of the 2011 Asian Cup in Qatar though that was not much consolation as all Koreans, usually pretty good at penalties, missed their spot kicks to lose 3-0 after 120 minutes of action ended 2-2. 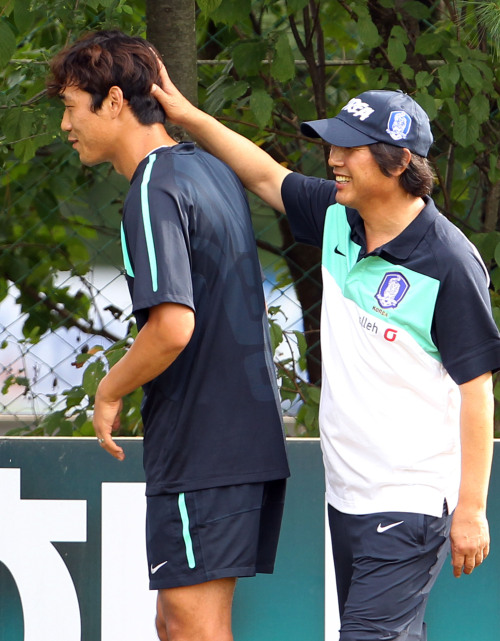 National team head coach Cho Kwang-rae (right) is expecting Park Chu-young to carry the offensive load in Lee Chung-yong’s absence. (Yonhap News)
The one before that came last October in Seoul and ended goalless in Cho Kwang-rae’s second match in charge of South Korea. Japan probably shaded what was a tight, though unexciting, match. The two other meetings in 2010 both came in Japan and both ended in wins for the Koreans, 3-1 in February in the East Asia Cup and 2-0 in Saitama in May just before both teams left for South Africa and the World Cup.

This game, in which Korea is hoping to make it three out of three in the Land of the Rising Sun, is another warm-up and is the last game before the start of qualification for the 2014 World Cup.

It is the penultimate round of qualification but given the draw is seeded so big guns such as the East Asian pair sit out the early exchanges. Twenty teams have been put in groups of four with the top two from each progressing to the final stage. Korea will be satisfied with being put together with UAE, Kuwait and Lebanon. Only two qualified for the Asian Cup and none made it past the first stage. None of the trips will be easy but the Taeguk Warriors certainly have what it takes to pick up points on the road to add to the total collected at home.

Japan’s group, with Asian Cup semifinalist Uzbekistan, Syria and 2010 World Cup participant North Korea is tougher, with the away trips especially tricky, but the Samurai Blue should still progress to the next stage fairly comfortably.

As always there is pride to play for and the Koreans love nothing more than winning in Japan. Cho Kwang-rae has named a strong roster, calling up most of the country’s European-based stars despite the fact that the season in the big leagues is just starting. Cho is keen to select those not distracted by the K-League match-fixing scandal.

“The situation in the K-League has not been settled and I decided I would rather call up those playing overseas and turn things around for Korean football,” said Cho. “And it’s Korea against Japan, so the fans will pay attention. We will prepare the best we can.”

The big blow for the boss is the broken leg of Bolton Wanderers winger Lee Chung-yong. The 23 year-old is an established member of the team and one of its best players. He is also expected to be out of action for the next nine months.

Lee’s absence will give others an opportunity to stake a claim on the right side of the “three” is Cho’s preferred 4-2-3-1 formation. One could be Lee Keun-ho, one of five Korean players who play in Japan to be summoned. The Gamba Osaka striker was red hot during the final stage of qualification for the 2010 World Cup but has lost his way a little since.

Another is Kim Bo-kyoung. The midfielder, who has still to become an automatic starter, has been labeled by sections of the Korean media as Park Ji-sung’s successor. The Cerezo Osaka star is as quick and hard-working as the Manchester United man but has some way to go before he can really be mentioned in the same sentence. He did take a step, of sorts, toward that by being linked to a move to the English Premier League last week. Korean media reports suggested that Stoke City, a mid-level club in England’s top tier, was negotiating with Cerezo and ready to pay almost $5 million for his services.

It remains to be seen what happens but after Lee’s injury, Korean fans would certainly feel a little better if another youngster heads to the world’s most popular league. Kim could also be involved in something else that will put a smile on the faces of supporters ― helping South Korea to win in Japan.

That will not be easy. The Samurai Blue is undefeated under Italian coach Alberto Zaccheroni who took the reins last September. Like Cho, he has named a strong squad, calling 14 players from Europe including Shinji Kagawa. The star midfielder broke a bone in his foot in the last Korean meeting, an injury that interrupted a stellar domestic season with Borussia Dortmund. Kagawa helped the club win the German championship and is looking forward to a second season. Another star player Keisuke Honda is also set to feature. “It is a friendly but with South Korean players the atmosphere won’t be very friendly,” said Zaccheroni. “This is our last game before the qualifiers and will be very important.”

It is. The qualifiers are important but for 90 minutes in Sapporo, it is all about regional bragging rights. The road to the 2014 World Cup in Brazil is about to start.