If he were not a monk, one might have easily mistaken him for a madman. Or perhaps it was because he was a monk that his behavior was considered even more idiosyncratic.

The late Jung Kwang, better remembered as the “mad monk,” was definitely not a typical monk. Instead of finding peace in remote temples, he spent his time creating art containing vulgar themes, as though to challenge the precepts of the ascetic religion.

Jung Kwang in front of a kiln. (Kim Ok-su/ SAC)
In 1960, at the age of 25, the young Jeju Island-born Go Chang-ryul earned his Buddhist name Jung Kwang, becoming a monk at Tongdo Temple in Yangsan City, South Gyeongsang Province. Unlike other monks, he enjoyed producing risqu paintings and writing controversial poems such as the one in which he referred to himself as a “dirty mop.” After reciting the poem at Britain’s Royal Asiatic Society in 1977, he gained another nickname: “mop monk.”

The Buddhist community, of course, was not happy with his behavior. Not many were surprised when Jung Kwang was finally divested of the priesthood in 1979.

In the art world, though, opinion was divided about him. While some despised his lack of education in art and considered him a maverick, others acclaimed his eccentricity which grew after his exit from the order. After Lewis R. Lancaster, head of the Berkeley University’s Institute of East Asian Studies, introduced him to the Western world as “the Picasso of Korea,” the monk became known overseas, held many solo shows and appeared in media.

In commemoration of the 10th year of his death, Seoul Arts Center in Seocho-dong, southern Seoul, is holding an exhibition “Jung Kwang: The Way of Wandering Monks” to look back at the life and art of the late monk. About 150 of his calligraphy works, terra-cotta figurines, copies of hand-written poetry, photos of his performances and films are on display. 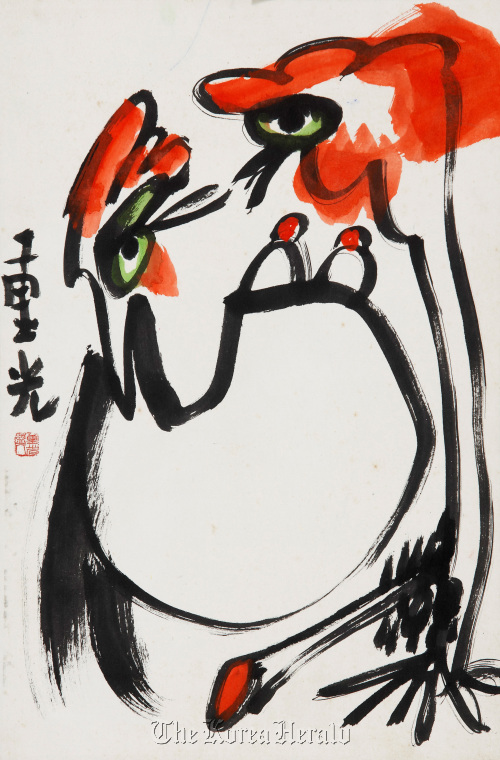 “A Hen and a Rooster” by Jung Kwang. (SAC)
Most of the exhibits date from after he was expelled from the temple, which means they are among the more risqu of his works. He painted a series of paintings featuring animals with magnified genitals and made a show of painting with a long mop dipped in Chinese ink, which was tied around the waist of his naked body. He even kissed a girl during a lecture he was giving in Berkeley University once.

Films shown at the exhibition include “Nonsense,” a film based on his 1985 book of the same title which was banned right after it was published. Ten scenes from the movie were censored for vulgarity, which only made Jung Kwang more famous. Another movie, titled “Way to Cheong Song,” is the one he starred in and was even nominated for best actor at Daejong Film Festival.

Jung Kwang’s works cover many genres and may have a too strong first impression, but what pierces through all of them is actually the philosophy of Zen, according to Lee Dong-guk, curator of the exhibition.

“The public only remembers Jung Kwang’s eccentric behavior. But he was not an oddball ― he was an artist who most accurately pierced into the essence of art and practiced it. By exploring the show, viewers will be able to see ‘why’ he came to the world, and that he certainly did not ‘come and leave in vain,’” said Lee, quoting what is known to be Jung Kwang’s last words before he passed away in 2002: “I came and leave in vain.”