To mark the 58th anniversary of its establishment on Aug. 15, The Korea Herald is publishing a series of articles on the looming retirement of Korean baby boomers and its socioeconomic impact on the nation. The following is the first of the eight-part series. ― Ed.

Eom Yun-shik worked all his life to support family, juggling the dual burden of having to support his living parents as well as his wife and three children.

Born to a poor farming family in a rural town in South Jeolla Province, he worked his way to urban middle class, by sacrificing weekends, holidays and much of his personal time.

Now at 51, the end of that arduous working life is just around the corner, but he is not thrilled.

“For me, retirement is a scary word,” said Eom, an accounting manager at a local manufacturer of construction equipment.

At his firm, the set age for retirement is 55, like in many other companies in Korea. However, his seniors at the company left before 55, and none, other than the CEO and a few executives, stayed past that age.

That means he will have to leave four years from now at the latest. But Eom feels that he’s not going to be ready.

“I don’t think many people at my age will be. It is unrealistic, I think, that society pushes us out of our jobs in our early 50s, when many of our children have yet to finish education, not to mention getting married,” he said.

Eom’s three children are all in their early 20s. Two go to university. All are unmarried and have not left home. He believes that he has to provide for them until they marry.

He is not alone in agonizing over this looming retirement. Eom belongs to a group of 7.1 million baby boomers in Korea who are nearing retirement, yet feeling increasingly insecure about it.

Baby boomers, the driving force behind Korea’s rapid economic development and democratization, are set to retire en masse over the next several years. 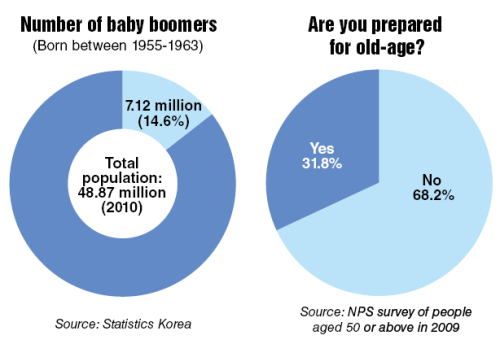 In Korea, the baby boomer generation is defined as those born between the years 1955 and 1963 ― a period when a nationwide reconstruction began after the 1950-1953 Korean War that saw a sharp increase in birth rates.

They now make up more than 14 percent of the population.

The oldest of this group turned 55 last year, the retirement age for many large companies including Samsung.

Each year until 2015, an average of 500,000 baby boomers will leave the workforce, the Ministry of Labor forecasts.

Instead of enjoying the good life, it seems that many of them are likely to undergo financial difficulties as they have spent most of their income on their parents and children. It is expected that many will be forced to continue working, if even for low wages, in order to make ends meet.

“Baby boomers are those who built the modern Korean society as it is now out of the acute post-war poverty. But as they recede, they stand to gain few fruits of it for themselves,” said Han Kyoung-hae, a professor of Seoul National University.

They are also the “sandwich generation,” Han said, as they have to care for their living parents, at least one, as well as doing a duty to support dependent children.

Baby boomers have paid for their children’s education all the way from kindergarten to university, and face the bills for their weddings and home rental for their married life. Many of them provide financial support for their parents, be they sharing the same house or living in separate homes.

The dual burden from parents and children leaves them little room for retirement saving.

According to a survey by Seoul National University Institute on Aging and insurer Metlife, the average baby boomer saves a meager 170,000 won out of a monthly income of 3.86 million won.

Another study conducted by the Korea Institute of Health and Social Affairs shows that baby boomers see 2 million won as the minimum monthly living cost for their old-year life.

Yet, 31 percent of them expected their actual income to fall short of that level.

Some 13.7 percent were not covered by the national pension. Some 48 percent were without a private pension scheme.

For even those who are covered by the national pension, there are many loopholes.

For one, pension income will only be available when its subscriber turns 61 or 62, depending on what year he or she is born. Presently, the pension payout starts when the pensioner turns 60, but that will be gradually raised to reach 65 by 2033.

The pension’s earnings replacement rate, the projected pension income measured as a percentage of pre-retirement income, stood at 50 percent in 2008 but will be reduced 0.5 percentage points every year from 2009 until it reaches 40 percent.

Baby boomers can’t expect their children to support them either, like their parents did, as family relations and lifestyles in Korea changed dramatically during the process of urbanization.

The unplanned for retirement of boomers is not just a personal problem.

Korea, as a nation, won’t be able to sustain the strain from their massive retirement, without a major overhaul of its welfare systems, experts warn.

“Coupled with the problems of aging population and low birthrates, the collective retirement of baby boomers, many of them unprepared, is a grave challenge facing Korea,” said Seol Yoon, a researcher at the Korea Economic Research Institute.

From an economic point of view, this could lead to a significant slowdown of the domestic economy, as demand sags and the labor force shrinks. Without proper measures, an increasing number of the retirees will fall below the poverty line.

“The future of Korea, whether it can leap toward an advanced economy and society or not, will be determined to some degree by how the country handles this issue,” Yoon said.