Fofana scored in the 81st to break a 1-1 deadlock and Lacazette closed out the scoring in stoppage time.

Gilles Sunu gave France the lead in the 27th before Kim Young-uk equalized in the 59th with a free kick. 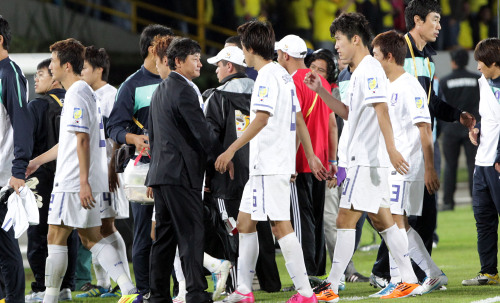 Korea’s U20 national team heads back to the locker room after its 3-1 defeat to France. (Yonhap News)
The victory may have saved France’s tournament after its opening 4-1 loss to Colombia.

“After the first match we really felt down,” Lacazette said. “But our friends and family told us to forget it and look forward to the next match.”

Both France and South Korea have three points in Group A after two matches, with four points usually needed to make the knockout round.

France plays Friday against Mali at Cali, and South Korea takes on host Colombia on the same day at Bogota. Both could still get through with draws, but victories will guarantee qualification.

France coach Francis Smerecki was taken aback when a local reporter asked him if his team deserved to win the game.

“We earned it,” he said. “Just like Colombia deserved winning the first game.”

France opened the scoring when Sunu drilled in Timothee Kolodziejczak’s header from a corner.

Kim’s 20-meter free kick high into the corner beat France keeper Jonathan Ligali to make it 1-1 with a half hour remaining.

“I think after we went behind 2-1 we lost some focus,” South Korea coach Lee Kwang-jong said. “We know we need at least a draw against Colombia.”

BARRANQUILLA, Colombia (AP) ― Host nation Colombia became the first team to reach the knockout stages of the U20 World Cup by beating Mali 2-0 on Tuesday.

Colombia has two convincing wins in its two games and even with one group game to go, it is guaranteed of finishing either in the top two in Group A or being among the best of the third-place teams.

The host nation’s form also signaled it was a legitimate contender for the title along with teams such as Spain, Brazil, Nigeria and six-time champion Argentina.

In other games on Tuesday, Portugal defeated Cameroon 1-0 and Uruguay drew 1-1 with New Zealand.

Jose Valencia scored for Colombia in the 23rd minute and James Rodriguez added another in the 90th, giving the South Americans six points in two matches following a 4-1 opening game victory over France.

“I’m happy not only for the goal but because I helped the team reach our first goal which was to advance to the next round,” Colombia’s James Rodriguez said. “Mali was a tough opponent, but we played at a high level and that was important.”

The last set of games in Group A will be on Friday when Colombia takes on South Korea at Bogota and Mali faces France in Cali. Colombia has six points, France and South Korea have three and Mali zero.