[ The Korea Herald – Send E-mail ]
The Black Skirts hopes to get rid of ‘American’ label
By
Published : Aug 3, 2011 - 18:11
Updated : Aug 3, 2011 - 19:39
While idol-centered K-pop has been heavily covered by the media, the Korean indie scene has received relatively little attention. This is the fifth installment of a series of interviews shedding light on the scene. ― Ed.

The Black Skirts, a one-man indie band run by vocalist, guitarist, keyboardist and songwriter Holiday Cho, has been widely known in Korea as a New Yorker-turned Hongdae musician.

The 29-year-old moved to the U.S. with his family after finishing elementary school and lived in New Jersey until he released his debut album “201” in Korea in November 2008. 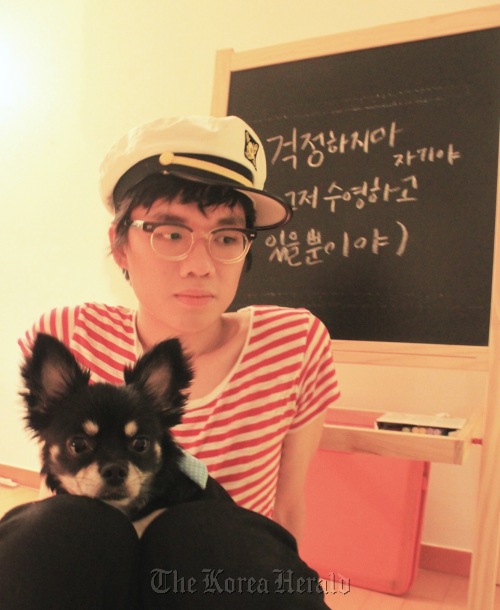 Cho said he wants to get rid of the American label he says has been attached to him since he made his debut in Korea.

“I guess it’s not wrong to say that my music is somewhat like Western indie pop but my music also has a Korean color. I’m 1.5 generation,” said Cho, referring to Koreans who moved to the U.S. as youngsters.

“When I was in the U.S., I didn’t feel like I was American, and in Korea, not really Korean. This kind of thought must have been reflected in my music.”

When making his first album, Cho wrote lyrics in English and Korean, half and half.

But as he has spent more time in Korea than in the U.S. after the debut album, he tried to write lyrics mostly in Korean for the second album.

However, the title of the second album is in English: “Don’t You Worry Baby (I’m Only Swimming).

“I came up with the title in English first and I couldn’t find any matching Korean words to that. But I want to get rid of the American label that Koreans have put on me,” Cho said.

“I want my life to be evaluated only by music, not some kind of label that’s irrelevant to my music.”

Before Cho started working on the second album, he was having a tough time, especially in early 2010. He left his management agency and he did not know what he should do next.

Then, on a whim, he bought a classical guitar on the street and made most of the songs in the second album in just two weeks.

“It was a ‘self-therapy.’ While lyrics were the vehicle for melodies in the first album, it is vice versa in the second. There was so much I wanted to say in the second album,” he said.

The core message he wanted to deliver is directly told by the album title. The concept was taken from Bob Dylan’s song, “It’s Alright Ma (I’m Only Bleeding).”

Cho said he wanted to tell people who cared for him not to worry about him too much.

The “swimming” means that he is alive anyway and also refers to how hard he is trying to stay afloat.

“Swimming is also a process to get to a destination, whether you get loved by fans or not,” he said.

The 12-track album encompasses a variety of musical styles from 1980s Korean pop to alternative to country.

The title song “Love Shine” on track No. 3 softly and quietly sings delicate melodies with a catchy chorus.

Cheerful tracks such as “Nalssi” (Weather) may remind you of veteran rock band Sanullim.

“I had never heard Sanullim songs before. Rather, I was thinking of rocker Kim Soo-chul,” Cho said.

The Black Skirts plans to hold a solo concert at Rolling Hall in Hongdae on Sept. 17 and another once in Busan in October.

Cho said he does not want to hold too many concerts but release a third album soon.

“My goal is to release an album every year from now on,” he said.