Chung founded the APO 15 years ago by gathering young musicians from across Asia to narrow differences between Korea, Japan and China, and the Sunday concert was part of the orchestra’s annual Asia tour. 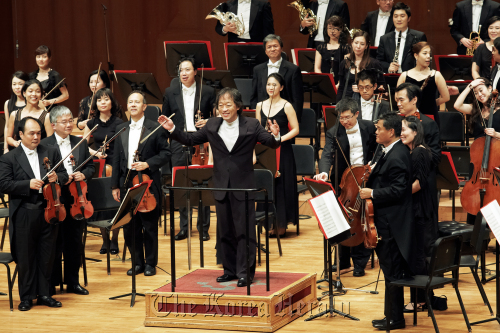 For this year, the APO chose Beethoven Symphony No. 7 and Brahms Symphony No. 1 as the Seoul concert program.

Almost immediately after standing on the podium, Chung started a simple and slow introduction of the Beethoven No. 7 first movement ― in poco sostenuto. Moving on to vivace, the rhythmic strings and wind instruments danced to Chung’s dynamic interpretation of the well-known theme, which was also used for opening of the Japanese drama series “Nodame Cantabile.”

Without the slightest hesitation, Chung began the second movement in allegretto, changing the mood with grave string sounds that were later taken over by wind instruments.

Chung’s conducting was all the more powerful with the third movement in presto and reached the peak in the final movement. He was stepping forward and backward, as though he was boxing or dancing with the musical notes.

After the intermission, Brahms Symphony No. 1 started with more members on stage. It was a complicated, serious piece which took 21 years to complete. After the second and third movements, which were lighter in tone and tension than in the first, the fourth movement highlighted strong timpani and horns.

Passionate performances by cellist Yang Sung-won and Qiang Tu from the New York Philharmonic were quite impressive. With a fantastic finale, the APO and Chung met with thunderous applause.

“There are two things about this orchestra. First, they are very good at playing. Second, it is a beautiful orchestra,” Chung told the audience after Brahms.

“We’re gonna play a fantastic piece for an encore. It is Beethoven No. 5 fourth movement,” said the conductor, starting the encore as soon as he spoke.

The orchestra is to hold a concert on Tuesday at Suntory Hall in Tokyo with the same program, and on Thursday at National Center for Performing Arts in Beijing, with Beethoven Symphony No. 7 and Mahler Symphony No. 4.