In the match in Bogota on Saturday, Kim Kyung-jung opened the scoring in the 50th minute, and Jang Hyun-soo added one with a spot kick in 80th minute to earn important three points for the Korean side.

The match was delayed almost an hour as heavy rain battered the Colombian capital, and continued through much of the match. 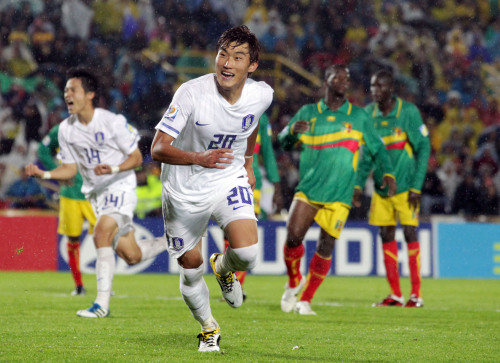 Korea’s Jang Hyun-soo celebrates his goal against Mali in the opening match in Group A of the U20 World Cup. (Yonhap News)
Despite the unfavorable conditions, Korea’s U20 side started nicely and had its first chance five minutes into the game. Lee Ki-jae curled a free-kick from 40 meters into the goal, but the goalkeeper managed to tip it over the bar.

Manager Lee Kwang-jong’s side took comfortable control of the first half, pinning the Africans in their own half.

After the break, the Koreans were sharper in their attack. And just five minutes into the second half, Kim of Korea University tapped a ball past the goalkeeper from inside the box to break the deadlock after latching onto a long throw-in from the corner.

The Koreans continued to display their attacking prowess, and came close to extend the lead six minutes later when Lee delivered another fine free kick just wide of the post.

Midfielder Bae Sung-dong dribbled past the defenders before being knocked down inside the penalty box. And the 19-year-old Jang comfortably dispatched the spot-kick into the back of the net to end the game.

“I am very satisfied with the result in such a difficult game,” manager Lee told FIFA.com after the game.

“The rain complicated the game for us. It forced us to change or usual style, but we were strong enough in some other aspects to achieve the victory.”

The 2011 U20 World Cup, which kicked off Friday, is running until Aug. 20 in Colombia. Twenty-four teams from around the world are divided into six groups of four, and Korea is in Group A alongside Mali, France and the host Colombia. Korea plays France on Tuesday, while Mali faces Colombia on the same day.