Party leaders are giving up their summer vacations with drinks in the sun for trudging in the mud with shovels and galoshes, joining in nationwide restoration efforts after floods and landslides hit the nation last week.

“This is not the time to leisurely enjoy a vacation,” said Hong on Saturday, before heading to Yeoncheon, Gyeonggi Province, with other party members. Yeoncheon saw some 750 millimeters of rain last week. 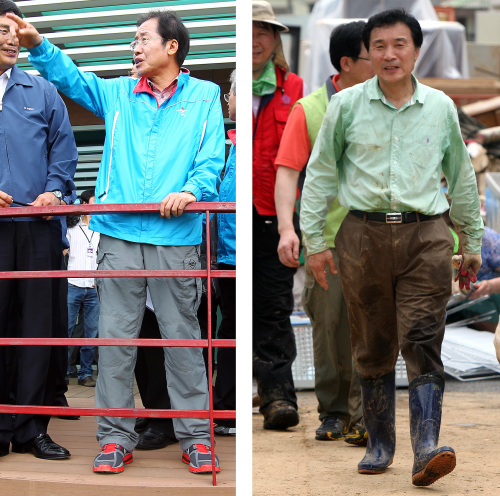 “All members of the GNP are on disaster control mode after the heavy rains,” a party official said. This week, the ruling bloc will focus on measures to support speedy restoration of the affected areas and to forge a stronger disaster response for the future, he said.

Dongducheon lost five people to the floods and some 1,880 households were affected by the rain. The victims include policeman Jo Min-su who was swept away while trying to save a stranded man.

DP Reps. Moon Hee-sang and Cho Jeong-sik also got their hands dirty with other volunteers, shoveling out mud and cleaning damaged homes.

“I will work hard to provide measures so that stores and small businesses damaged by the floods will be able to receive compensation,” said Sohn.

“Not only the government itself should be helping those affected by the floods but society as a whole.”

Minister for Special Affairs Lee Jae-oh also set out on Saturday for Pocheon, Gyeonggi Province, which saw more than 750 millimeters of rain last week, to console those displaced by the floods.

“Have civil servants personally visit villages and record information from those affected by the floods,” said Lee.

Seoul City Mayor Oh Se-hoon, who not only had his hands full with the plebiscite vote for free school lunches, lost not only his vacation but weekends as well.

Former GNP chairman Chung Mong-joon also deferred his vacation to survey the damage in Dongjak-gu, Sadang-dong ― his district ― and help the around 2000 families affected by flood damage.