[ The Korea Herald – Send E-mail ]
Israelis protest high cost of living
By 이현주
Published : Jul 31, 2011 - 19:16
Updated : Jul 31, 2011 - 19:16
JERUSALEM (AP) ― Tens of thousands of Israelis took to the streets nationwide on Saturday to protest rising housing prices in the largest turnout in a grass-roots movement that began two weeks ago and is demanding steps from the government to ease the burden.

The protests over housing costs have tapped into wider discontent among Israelis over the high cost of living and the growing gaps between rich and poor. Other protests include doctors striking over working conditions and pay, parents demonstrating against expensive child rearing costs and similar outpourings over increasing gas prices. 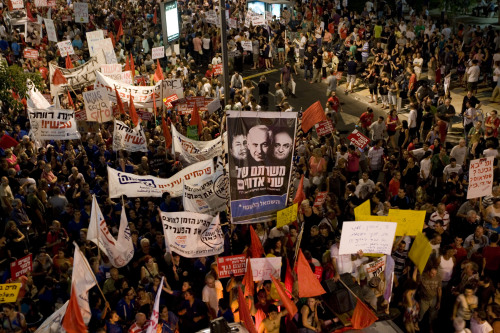 Israelis march during a protest against the cost of living in Israel, central Tel Aviv, Saturday. (AP-Yonhap News)
Thousands thronged the streets of Jerusalem, Tel Aviv and other major cities and chanted, “The people demand social justice.” Protesters waved Israeli flags and placards that read: “work 3 jobs but don’t make ends meet,” “killing ourselves to live” and “social gaps are killing us.”

Police spokesman Micky Rosenfeld said more than 100,000 people protested in 10 cities across the country from Beersheba in the south to Kiryat Shmoneh at the northern tip of the country Saturday night. Police closed major streets for the protesters to march.

The demonstrations began two weeks ago in Tel Aviv, where young activists set up a small tent encampment in a central neighborhood to draw attention to the country’s housing crunch. The protests, inspired in part by unrest in neighboring Arab countries, have continued to gain steam and show no signs of slowing.

“This is a great success; people are marching in the streets and living in the streets for the past two weeks,” Stav Shafir, one of the protest leaders said. “Finally people are choosing to determine how they want to live. We want affordable housing, health, education and welfare.”

The weeks of popular demonstrations are becoming a headache for Prime Minister Benjamin Netanyahu with polls showing a sharp drop in his approval ratings and strong support for the protesters. Netanyahu announced a package of reforms meant to lower housing prices last week but it did little to defuse the anger.

In Jerusalem, thousands marched through the city center to the prime minister’s house.

Protesters held up signs reading, “Netanyahu go home.” The protests have brought together people from diverse background and a wide range of political views. Recent demonstrations have included marches against the prices of gasoline, boycotts of expensive cottage cheese that forced manufacturers to lower prices and lengthy strikes by social workers and doctors over pay and working conditions.

The average Israeli salary stands at about $2,500 per month, with key professions like teachers, civil servants and social workers typically earning less than $2,000 a month.

Home prices jumped some 35 percent between December 2007 and August 2010 and rental rates have also risen steadily. Rent on a modest three-bedroom apartment in central Jerusalem can cost more than $1,000 per month and costs even more in Tel Aviv.

Protest organizers addressed a crowd of 50,000 people in Tel Aviv.

“We are here today to tell our elected representatives in the clearest manner that the government has a responsibility toward its citizens,” Daphni Leef, one of the leaders said. “Public housing isn’t a dirty word. No more tricks.”

Opposition leader Tzipi Livni said parliament should cancel its summer break to deal with the crisis.

Cabinet secretary Tzvi Hauser tried to defend the government’s policies on Channel 10 TV but was heckled and silenced by questions from a panel of critics. Hauser said the government had inherited the problems from previous governments and was working hard to solve them.