SAGA ― People may be familiar with the name Kyushu, the southernmost island of the Japanese archipelago, but few are acquainted with Saga, the northern prefecture located between Fukuoka and Nagasaki.

Visitors from Seoul or other regions would enter the area through the Fukuoka International Airport but those who depart from Busan may enjoy a lower price by traveling by sea from the Busan to the Hakata Harbor International Terminal.

Located on the southwestern part of the country, Saga is some 1,000 kilometers away from Fukushima, where radiation leak accidents took place following the unprecedented earthquake and tsunami in March.

Like many other regions in Japan, Kyushu and its affiliated Saga Prefecture held a series of presentations in Korea earlier this year to promote the safety of the region as a tourist spot.

“Our goal is not only to restore the tourism industry in our region but also to promote other unknown beauties and fun as well.” 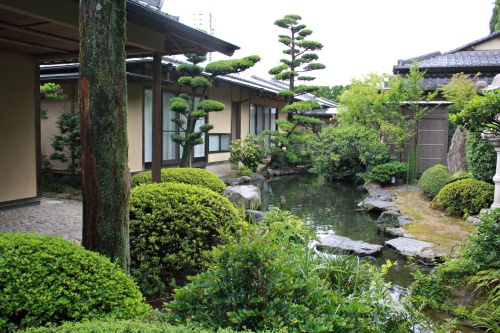 The private traditional garden attached to the suite building of a ryokan, or hot spring inn, in Saga, Kyushu. (Bae Hyun-jung/The Korea Herald)
Lodging in a ryokan

Saga Prefecture contains four major onsen or traditional hot spring villages ― the Furuyu and Kumano-gawa Onsen in the central region and the Takeo and Ureshino Onsen in the southern region.

The Takeo Onsen, directly accessible from the airport by the Japanese Railway line, is widely recognized as a medicinal spring, with its high content of natural minerals.

It is also famous for being patronized by many historic figures in the past, such as Miyamoto Musashi, the famous Edo-period warlord.

“Visiting an onsen is not just about taking a hot spring bath,” said Hiroto Nakamura, manager of Kyotoya, a 101-year ryokan, or traditional Japanese onsen inn.

“It is about experiencing Japan itself, by staying in a ryokan, wearing a yukata, tasting the food, viewing the surrounding scenery and every other cultural inheritance in the region.”

The neighboring Ureshino Onsen town is recognized as one of the three “beauty hot springs” in Japan, with its mineral-rich skin-beautifying hot water.

The place is also famous for its aesthetic use of green tea leaves. Warakuen, a major ryokan in the area, was the first onsen in Japan to combine tea leaves with hot springs some 20 years ago.

The Warakuen Ryokan also offers an additional delight to its female visitors. Ladies may choose one among the various colorful yukata, casual summer kimonos commonly made of cotton.

Staff members are available to give customers a hand with the complicated meters-long silk waistband, called obi.

Other ryokan in the area also offer a variety of cultural experiences other than the onsen itself, such as tea ceremonies.

To Japanese people, Saga is largely known for its ceramic arts, represented by the Imari and Arita-yaki pottery.

The ceramic arts in the region actually trace back to a Korean potter who was brought to the archipelago during Toyotomi Hideyoshi’s invasion of Korea in the 16th century.

Tourists may take a look around the Arita Porcelain Park and the Kyushu Ceramic Museum where there is a wide range of products from everyday use dishes to highly valued art pieces. The Arita Park also offers visitors a chance to make their own piece of pottery, which is delivered in a few weeks time.

Those who visit the region in spring time may enjoy the famous Aritacho, or Arita Porcelain Market, which takes place every year from late April to early May. The event is popular not only among tourists but among local porcelain aficionados as well.

Saga beef is ranked as one of the top three beef brands in Japan, together with Matsuzaka beef and Kobe beef. Characterized by fine marbling, tender texture and rich sweet flavor, it is most highly recommended for shabu-shabu, a form of Japanese hot pot cooking.

Arita has made good use of its specialty porcelain in developing a special menu. The Oota Gallery and Cafe Restaurant won the first prize in the annual ekiben competition with its porcelain-baked curry.

“An ekiben, a boxed bento meal sold on trains and in stations, is more than just a boxed meal, but an effective way to deliver the local food and culture to travelers,” said Kosuke Kadosumi, general manager of Oota.

“While seeking ways to promote Arita’s beautiful ceramics and rich food ingredients, we have devised this new type of curry.”

After enjoying the tasty baked curry, customers may take the porcelain bowl back home as a souvenir.

Those who visit Ureshino are not to miss the onsen tofu, a local specialty which may not be found elsewhere.

The salt and protein in tofu, when boiled in hot spring water, react to the minerals and the tofu becomes mellow, resulting in a unique texture.

Also, the central Kanzaki area is famous nationwide for its high quality noodles.

Yutoku Inari Shrine, one of the three greatest shrines in Japan, sees more than 2.8 million visitors every year.

The rich vermillion colored buildings surrounded by greenery has been inspired by Baekje architecture, according to Tomohisa Nabeshima, the chief monk of the shrine.

Visitors with young children may also take a fun tour around the Saga Prefecture Space Science Center, which offers a variety of experiences.

Those who decide to enjoy an early winter onsen trip may also participate in the Saga International Balloon Festival in early November.

Daily flights are available between Incheon and Fukuoka and ferry trips between Busan and Hakata.

It takes about an hour by express train from the Fukuoka Airport to the Takeo Onsen. The Ureshino Onsen is located half an hour away by bus from Takeo.