You see the strangest things in the desert. Last year, for instance, if you followed a ridgeline here you would have discovered a massive alien spaceship and, nearby, James Bond strumming a ukulele beneath a wispy tamarix tree. “Wait around,” he muttered, “and Indiana Jones might show up too.”

The man with the four-string uke was actor Daniel Craig, who is best known as the British spy 007 but was on this particular day on location with “Cowboys & Aliens,” an audacious $180-million film that also stars “Raiders of the Lost Ark” hero Harrison Ford. Both actors have brought grim, granite stares to the project, which leads to a nagging question: Is this film as silly as its title or as fierce as its famous faces?

“I’m not sure anyone knows what to make of this movie,” Craig said as he plucked away on a Beatles ballad. “But you know that’s not necessarily a bad thing.” 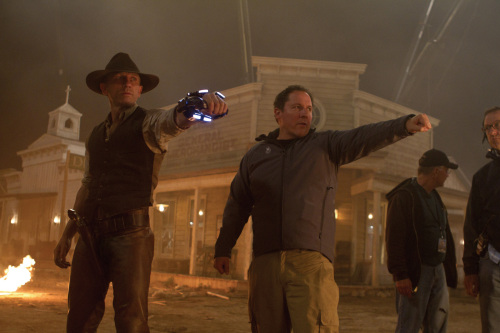 Daniel Craig and director/executive producer Jon Favreau are seen on the set of “Cowboys & Aliens.” (Zade Rosenthal/Courtesy of Universal Studios and Dream Works II Distribution Co. LLC/MCT)
When “Cowboys & Aliens” makes its world premiere Saturday night at Comic-Con International in San Diego, it will introduce the biggest (and perhaps the only) wild card in Hollywood’s stacked-deck summer. It’s been a season of sequels (more pirates, more hangovers, more wizards, more giant robots, etc.) and big-brand heroes (Thor, Green Lantern, Captain America), but this is a horse of a different color.

The movie, directed by Jon Favreau and opening July 29, is set in the 1870s in a blister-scab town called Absolution that kneels before a cattle baron named Col. Woodrow Dolarhyde (Ford). One day a wounded man (Craig) arrives with a strange metal device affixed to his wrist and zero memory. The Man with No Name, it turns out, is an Old West victim of alien abduction.

The film, which also stars Olivia Wilde and Sam Rockwell, is structured like a Western and (somewhat) resists the contemporary approach of nonstop action in favor of building toward a big showdown, a la “High Noon.” At the same time, it promises the visual-effects velocity and crackle of today’s summer films. If all that sounds like a tall order, well, check back after the premiere.

The core of that concept and the film’s title come from an obscure, small-press comic book series by Scott Mitchell Rosenberg and the potential of it (and winding path of the property) has brought together a startling posse of Hollywood big names. Ron Howard and Brian Grazer are two of the producers and Steven Spielberg, as executive producer, was so engaged by the possibilities of the story that he arranged for Favreau and two of the screenwriters, Damon Lindelof (“Lost”) and Roberto Orci (“Star Trek”), to join him for a private screening of John Ford’s “The Searchers.”

“He sat over our shoulders at a screening room on the Warner Bros. lot and gave us a running commentary,” Favreau said with marvel in his voice. “What happened with this film is you had creators like Ron Howard and Steven who are very passionate about the Western genre and saw here an opportunity to tap into that in a big and crowd-pleasing way.”

One crowd that needs to be pleased are all the money people. The movie arrives with three financiers (Spielberg’s DreamWorks Studios, Universal Pictures and Relativity Media), two distributors (Universal in the U.S. and Canada, Paramount overseas) and 16 credited producers or executive producers. In these tight-margin days it’s not unusual to see a lot of Hollywood players splitting the risk on a big project, but Howard said the herd behind “Cowboys & Aliens” went well beyond the norm.

“I don’t think I’ve ever been in a situation where there were so many people who were accustomed to being virtually autonomous in terms of decision-making on most projects,” Howard said. “It all went really smoothly though, and I think that’s due to the respect for and belief in Jon. He came in, and we all saw that he understood the movie and the tone we were all hoping for. And it was clear he was going to elevate it all and make it his own. It was also clear the buck was going to stop with Jon.”

Last week, the 44-year-old Favreau talked about the experience of working with Howard and Spielberg as if it were a master class. Whether it was in pre-production story meetings or in the editing bay, the elder Oscar winners were a fount of insight about pacing, priority, tone and, above all, winning over the audience.

“Filmmaking is not an art that you would do if you were alone in a room,” Favreau said. “The way it is received is part of the approach, it informs your decisions. You want the film to be seen; you want it to be embraced and successful.”

Favreau is a filmmaker clearly comfortable with both the art and commerce of today’s Hollywood. Intense and competitive, he is eager to follow up the $1.2-billion grosses of his two “Iron Man” films for Marvel Studios by carving out a new winner with an unproven brand in the same summer that Marvel has two of the biggest releases, “Thor” and “Captain America: The First Avenger.”

It was no secret that Favreau was ready to leave Marvel behind, although he won’t elaborate. “Iron Man 2” was a grueling shoot (the star, Robert Downey Jr., described it as a “screaming, wild-eyed bar fight” to make), and Favreau looked haggard and exasperated in the final days of work. It was a far different vibe on the set of “Cowboys,” where Favreau had a ukulele of his own on his lap and watched the monitors with the quiet confidence of a director who is open to surprises but not facing daily chaos.

“This is so different, we started with very strong material in the script ... and the Western genre has a lot of rules to it, you’re not discovering a form, you’re commenting on an established form,” Favreau said. “There’s plenty of room for inspired moments, but the exposition is laid out. There’s freedom in the structure too in a way.”

His voice trailed off, and he began strumming “Sea of Love.” “You know, there’s snakes around here, we had a 6-footer one day. It’s good though. You just give them a line of dialogue and they’re fine.”