“The atmosphere was good, the meeting was constructive and interesting. We exchanged views on general issues,” Kim said on the lunch break during the first-day session, which opened at around 9:30 a.m. at the U.S. Mission to the United Nations. 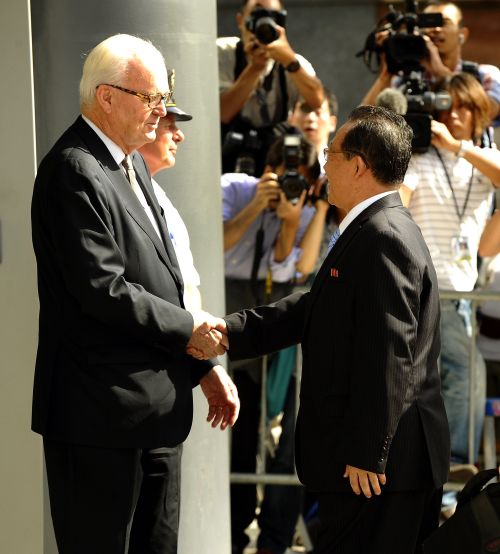 Stephen Bosworth, the Obama administration’s top envoy on North Korean affairs, greets North Korean Vice Foreign Minister Kim Kye-gwan (right) at the U.S. Mission to the United Nations in New York on Thursday. (AFP-Yonhap News)
Leaving the venue in the late afternoon, however, he gave no comments to reporters.

U.S. officials confirmed that the first-day meeting ended and the two sides will meet again on Friday.

“This is a chance for us to sound out the North Koreans,” State Department spokesman Mark Toner said at a press briefing in Washington earlier in the day.

“What we’re looking for ... is a concrete indication that they’re going to move forward,” he added. “It’s a chance for us to gauge their seriousness. These talks are focused on North Korea’s commitments and living up to them.”

“We expect that to continue through tomorrow,” Toner said. He refused to reveal the breakdown of the U.S. inter-agency team.

Kim arrived in New York on Tuesday for the first meeting with Bosworth since December 2009 in Pyongyang.

The six-party talks, launched in 2003, also involve South Korea, China, Japan and Russia. The negotiations were last held in December 2008 in Beijing.

In a Sept. 19, 2005, Joint Statement, the North agreed to abandon its nuclear weapons program in exchange for economic and political incentives.

But the six-party talks have been stalled due to Pyongyang’s nuclear and missile tests in 2009 and U.N sanctions on the regime.

In July 2009, the North’s No. 2 leader, Kim Yong-nam, told an international forum that the six-party talks had come to a permanent end.

A breakthrough came in Bali, Indonesia, last week as the top nuclear envoys from the two Koreas had a surprise meeting on the sidelines of a regional security forum.

South Korea and the U.S. have pushed for a three-step denuclearization process ― inter-Korean dialogue, Pyongyang-Washington talks and a resumption of the six-way negotiations.

Meanwhile, the South Korean government dispatched Cho Hyun-dong, deputy head of its six-way talks team, to New York for consultations with the U.S. before and after the North-U.S. meeting.