So far so good. Olympic gold medalist Park Tae-hwan has ended his 2011 World Championship campaign on a high note, successfully retaining his 400-meter freestyle title and raising expectations for the 2012 Olympics.

Having had a bitter experience at the previous worlds in Rome, where he failed to advance into finals in any race, Park was determined to make up for it at the Shanghai World Championships. 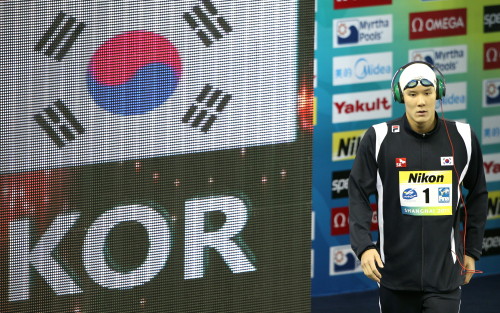 Park Tae-hwan has put emphasis on improving his dolphin kicks. (Yonhap News)
And he did, winning the 400m title on Sunday, beating off strong rivals such as Sun Yang of China and Paul Biedermann of Germany.

It was a much-anticipated victory, but the 22-year-old could not hide his disappointment at winning the race in 3 minutes 42.04 seconds, just off his career best of 3:41:53. He knew that he would have to improve for the London Olympics.

In Shanghai, Park also competed in the 100 m and 200 m events, but failed to add medals in either.

The two races showed what he should now work on for an improved performance in the next year. In both races, Park started brilliantly with the best reaction time, but he dropped behind the leaders after the first turn in 50 m, and was unable to close the gap.

Observers insist that Park now needs to work on his underwater swimming skills in order to raise his chances for the London Olympics. Tall and powerful swimmers seem to have an edge when it comes to underwater swimming, which was apparent in the 200 m. The 183 cm-tall Park just did not have the speed to compete against the 193 cm-tall Phelps and 192 cm-tall Biedermann.

Since having teamed up with Australian coach Michael Bohl, Park dropped out of the 1,500 m in order to focus on short distances, and on improving his dolphin kicks.

There were some good signs in Shanghai. His underwater start used to go for around 6-7 meters, but in the 400 m he recorded 12 meters with a stronger dolphin kick.

But the 2008 Olympic medalist admitted that he needs to build up his muscles and strength to contend with the rivals in London next year.

“My start and turn are still lagging behind the leaders. I need to work on it,” he said after the 200 m race.

Park will return home on Monday and will take a short break before kicking off his training for the London Olympics.