Sections of Nambu-Sunhwan-ro, a ring road, a few meters from the Seoul Arts Center, are still submerged in waist deep mud, water, tree branches, trash and even a hypodermic needle. 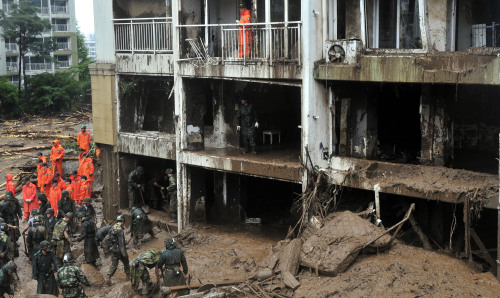 Firefighters and soldiers clean up the mud and debris Thursday from the rain-triggered landslide of Mount Umyeon. (Kim Myung-sub/The Korea Herald)
Those hit hardest by the landslide are the residents of a Bangbae apartment overlooking Mount Umyeon, with a total body count of 17.

The powerful landslide directly affected those up to the 5th floor of the apartment, while the rest lost power and electricity.

Cars still left in the surrounding areas are smashed beyond recognition, with only the shape of wheels to hint the objects’ original form.

Hundreds of police, army soldiers, city and district officials and various construction companies work furiously along the street of a little less than a block, trying to clean the area in what seems like a vain attempt.

Only time can tell what will become of the surrounding area.

“The situation is not very good at all,” said Jang Do-sung with Gwanghyuk Construction.

“In order to get things completely back to normal, it’s going to take over a month.”

And the tension is thick as residents hopelessly express their frustration by yelling at officials on scene, asking for something more to be done.

On Mount Umyeon, the landslide had created a neatly carved path along the mountain, the width of a soccer field in certain areas, leaving nothing but dirt in what used to be a lush forest.

Others hit by the devastating landslides coming off the mountain include Jeonwon village, an area known as a residence for the wealthy.

The entire neighborhood suffered damage, as not a single street was spared from the mudslide, and even 24 hours later some streets are still seeing water flow through like a river.

“We really can’t do much to fix the situation as more rain is expected to fall” said Kim, a firefighter on the scene.

Even the Audis and BMWs were waterlogged or side-swiped by the mud slides coming off the mountain.

Trash littered the streets, either thrown out by residents because of water damage or carried down by the mud and rainfall.

Families gather at the town’s center for water rations from the back of a truck, a scene synonymous with developing countries, as all utilities have been shut down.

However, some residents of the mostly wealthy village were not as lucky. Residents just a couple yards above living in shacks and outfitted greenhouses received absolutely no help from the hundreds of recovery workers at the scene.

“My house helped to prevent a lot of the damage, protecting the richer people down the ways,” said Lim Yang-ok, a 21-year resident of the neighborhood who lives in a makeshift home.

“Not a single person came up to see if we were ok,” she said.

And although Lim does not technically own the land or pay taxes, she was still distressed as she had lost everything she owned, as meager as it may be.