Hyundai Motor and Kia Motors had fallen behind Toyota Motor and Honda Motor in developing fuel-efficient and eco-friendly vehicles.

But the nation’s two affiliated companies have plunged into keen competition to dominate the international green car markets by launching the hybrid version of popular sedans this year.

“While we have joined the growing market for hybrid electric vehicles later than rivals, the hybrid Sonata (of Hyundai Motor) and K5 (of Kia Motors) come with significant improvements to existing hybrid automobiles to give them an edge in the market,” a Hyundai Motor Group spokesman said Thursday. 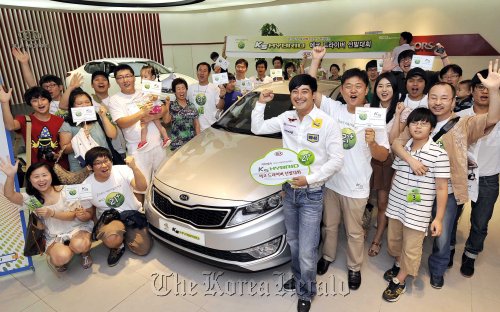 Consumers pose with the Kia Motors K5 hybrid during the automaker’s event to select “eco-friendly drivers.” (Kia Motors Corp.)
The sedans are fitted with the newly developed 2-liter Nu engine that puts out 150 brake horsepower and a 30-kilowatt electric motor, a combination which puts their fuel economy at 21 kilometers per liter.

According to the companies, the electric motor fitted in the two hybrid models is 18 percent smaller and 30 percent lighter than those used in hybrid electric vehicles from rival carmakers.

While Toyota’s combined hybrid system has a complex layout and requires a relatively large motor, the hybrid electric Sonata has a simpler layout where the motor is placed between the engine and the transmission.

“By doing that, a smaller motor can be used, and an engine clutch is used to regulate power output from the internal combustion engine,” a Hyundai Motor official said.

Hyundai Motor Group chairman Chung Mong-koo has continued to stress that holding high-end technologies is more crucial than any other factors in becoming a truly competitive carmaker.

“While the former hybrid sedan ― Avante LPi ― has failed to attain vast interest in global markets, it seems that chairman Chung has been quite satisfied with the quality of new hybrid sedans,” the official said.

In Hyundai Motor Group’s hybrid electric system, the engine clutch remains open when the vehicle is starting and when driving at low speeds enabling the vehicle to be powered without contribution from the engine.

When the vehicle is moving uphill and at higher speeds, the clutch is engaged bringing both the engine and the electric motor into play.

“When the vehicle decelerates, the regenerative braking system is engaged to recharge the battery pack ready for the next full-electric mode,” a Hyundai official said.

The vehicles are also the world’s first hard-type electric hybrid vehicles ― hybrid electric cars that are able to operate using only electricity at low speeds ― to be fitted with a lithium ion polymer battery pack.

In order to ensure pedestrian safety, both the K5 and the Sonata are fitted with a virtual engine sound system to enable pedestrians to hear the vehicles when in full-electric mode. 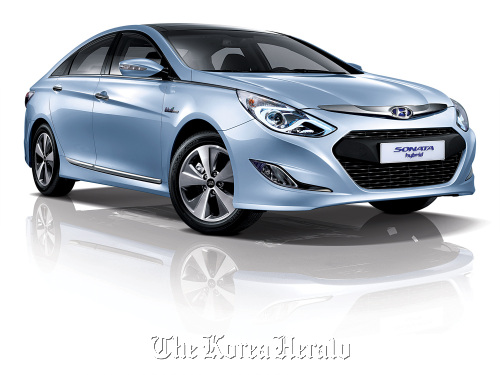 Power density refers to the efficiency of power transfer, while energy density indicates the amount of energy that can be stored within a given volume of battery.

In addition to using lithium polymer battery packs, Hyundai and Kia have given their first gasoline-electric hybrid cars a number of features to gain an edge over the competition.

“Unlike hybrid electric vehicles from competitors that are commonly fitted with continuous transmission, the specially designed six-speed automatic transmission allows the vehicle to respond more dynamically,” a Hyundai official said.

“In addition, we were able to provide a smoother driving experience by using the electric motor to absorb gearshift shock.”

The hybrid electric versions of the two sedans have also been given design changes to differentiate them from their internal combustion engine-driven cousins.

“In the Sonata hybrid, Hyundai’s design identity of ‘fluidic sculpture’ has been maintained, but the vehicle was given a hexagonal radiator grill to give the car a modern but eco-friendly image,” a Hyundai official said.

“The headlamps have been given white LED position lamps to highlight the eco-friendly image, while the rear lamps have been designed for a more three dimensional feel.”

The Hyundai official added that the Sonata hybrid is also fitted with aerodynamically designed parts, while the upholstery is produced using naturally occurring anti-bacterial materials.

Such features are also found in the hybrid electric K5.

Along with such features, Hyundai and Kia have given their first gasoline-electric hybrid cars the latest interior features including a 4.2-inch color TFT-LCD supervision cluster.

Hyundai Motor has the goal of overtaking Toyota Motor in sales of hybrid sedans in the U.S. The Sonata hybrid has ranked second following the Japanese carmaker’s Prius hybrid.

The sales gap is still wide. The Sonata’s sales reached 1,422 in June compared to 4,340 for the Prius, which has already dominated the global hybrid vehicle market.

But the noteworthy point is that the newcomer Sonata hybrid outpaced other hybrid models such as Toyota’s Camry, Honda’s Insight, Honda’s CR-Z and Ford Motor’s Fusion.