Rain will continue in central parts of the peninsula through Friday afternoon with the rain front moving southward later that day, the Korea Meteorological Administration said. 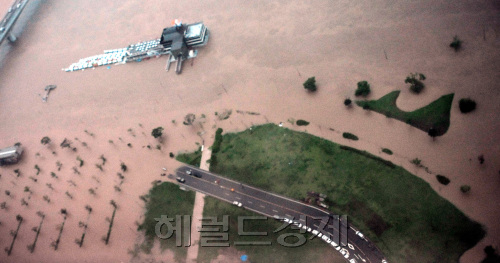 A section of the Olympic Expressway and parts of a riverside park near Han River are submerged in Seoul on Thursday. (Park Hyun-koo/The Korea Herald)
Nearly 500 millimeters of rains per hour, a volume witnessed only once or twice in a century, was recorded in Seoul from Wednesday through Thursday, causing casualties from landslides, and flooding roads and houses in the metropolitan area.

Seoul saw its third-largest single day precipitation on Wednesday since 1907, when Korea first began to conduct official weather surveys, according to the KMA.

North Korea is likely to see lots of rainfall in its southwest, including Hwanghae Province, so the agency urged caution against possible flooding of Imjin and North Han rivers.

Unlike Seoul and its vicinities, the weather in the southern provinces of South Korea is expected to be hot and humid this week, with afternoon highs topping 30 degrees Celcius.

After the rains, a heat wave is expected to scorch most of the peninsula with the mercury staying around 30 degrees Celsius throughout the day, it added.

The disaster management authorities estimate that more than 50 people are dead or missing from the record-setting downpour that pounded the country’s central regions from late Tuesday.

Seoul was hit hard by the downpour, which flooded many roads and basement facilities. Power supply to some 14,000 homes was cut, hundreds of cars were left on flooded roads and landslides swept through hilly areas, including the southern region near Mount Womyeon.