The luxury sedan received 904 points out of a maximum 1,000 in the Associates Automotive Performance Execution and Layout survey by J.D. Power and Associates on new car owners from February through May, Hyundai said. 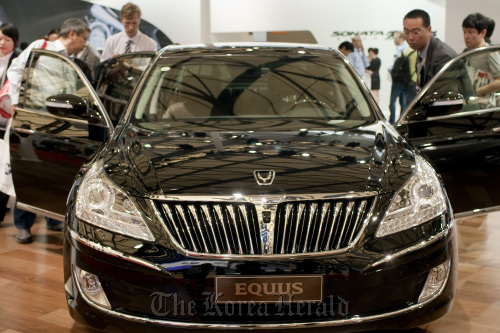 The BMW 7 series came in second with 889 points, while the Audi A8 and Mercedes-Benz S-class received 880 and 876 points, respectively, in the large premium car segment. The Lexus LS received 873 points placing it sixth among the eight luxury models surveyed.

Hyundai also said that the Equus got the highest points among the 234 models checked by global marketing and consumer information providers and received the coveted APEAL award.

Hyundai said that the latest results reflect its continuous efforts to make high quality cars, which has contributed to boosting its brand image abroad.

“The latest recognition is expected to further bolster the carmaker’s image that can help future sales,” the company said.

The Equus, Hyundai’s flagship luxury sedan, has already received market recognition as the best buy car by Consumer Guide last December shortly after it was introduced in the U.S. market, and picked as the best car in April by the National Automobile Dealers Association.

The vehicle, in addition, got 61 points in the Initial Quality Study by J.D. Power in June, the highest among the 12 premium car models checked.