Lee Soo-man, chairman of S.M. Entertainment, said Wednesday although K-pop is increasingly popular around the world, it needs a strong boost in the local market first, to further advance to the next level.

The local music market needs a new digital music distribution platform ― an iTunes-like one or an entirely different one ― not only to allow purchasing digital music and globally sharing music for free but to give profits to songwriters from corporate marketing and advertisement, he said. 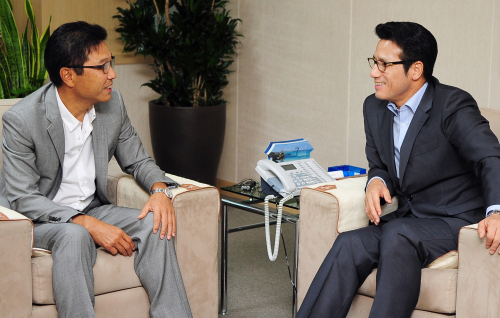 Lee Soo-man (left), chairman of S.M. Entertainment, talks with Culture Minister Choung Byoung-gug on K-pop in Choung’s office in Seoul on Wednesday, after receiving a plaque of thanks from the ministry for promoting the Korean Wave through K-pop. (Ministry of Culture, Sports and Tourism)
His comments came during a conversation with Culture Minister Choung Byoung-gug, after receiving a plaque of appreciation from the Culture Ministry for accelerating the Korean Wave through K-pop promotions for the past 10 years.

“We’re promoting idol groups through social networking sites such as YouTube and Facebook. It was important to hold concerts overseas, like the recent one in Paris. But now is the time to enhance the local market,” Lee said to Choung at the minister’s office in Seoul.

“The reason our singers like BoA and H.O.T. were successful in overseas markets was that we had accumulated capital in the local market before they went overseas,” he said.

Lee was responding to Choung’s comment that the Korean government plans to set up a space in the Korean Cultural Center in Paris to encourage European fans to enjoy K-pop. Earlier on Friday, Lee said he would donate 1 million won ($950) to the cultural center in appreciation for the center’s cooperation in holding S.M.’s Paris concert.

To boost the local market and curb illegal downloads of music, Korea can make a new digital music platform which allows songwriters or producers to offer their new songs for free, on the condition that a corporate ad can be inserted, Lee said.

“Utilizing advertisement and marketing, we can induce 100 million clicks, for example, on Girls’ Generation’s new song by offering it for free for two or three months after a release,” Lee said.

“A high number of clicks will lead to a global exchange of K-pop, which will also lead to a virtuous circle of capital. Culture can lead the economy.”

Choung noted that when he visited Paris and met with French fans of K-pop in June, he found that most of them had originally been interested in learning the Korean language.

“While they were trying to learn Korean language easily with K-pop, they fell in love with the music. Their friends, who heard K-pop was good, were starting to take Korean language lessons to know K-pop better,” Choung said.

“What we have to be really careful about is that if the government organizations recklessly support poor quality hallyu concerts riding on the Korean Wave, it might give overseas fans a wrong first impression that there was nothing special about K-pop. Then, it will be very difficult to change their impression,” Lee said.

Lee also hinted that S.M. Entertainment and one of Korea’s leading conglomerates may team up for a new project.

“I think our company, as a leader (in the entertainment industry), should devise a new plan with a leader in business,” he said.