The carmaker said the flagship luxury car is being manufactured at its Busan plant 453 kilometers southeast of Seoul with the vehicles to reach consumers in mid August. 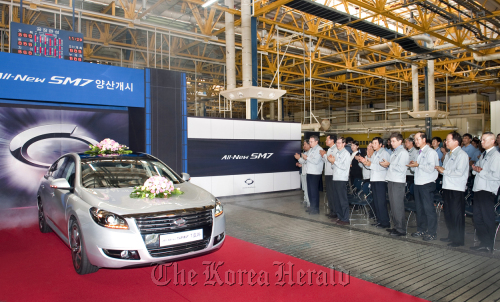 Renault Samsung Motor Co. executives and workers applaud at a ceremony to mark the start of production of the new SM7 sedan at a factory in Busan on Monday. (Yonhap News)
The new full-size sedan represents a “complete model change” from the current SM7 vehicle that launched seven years ago and features a third-generation VQ engine connected to a six-speed transmission system.

The company said that exact annual production figures have yet to be determined with all SM7s to be sold on the South Korean market for the time being.

The company has injected 400 billion won ($379.6 million) into building the sedan, with development taking 32 months.

The local price of the new SM7 will be set at between 30 million won and 39 million won depending on engine capacity, trim and other options that are expected to be competitive in the local market.