[ The Korea Herald – Send E-mail ]
Miyazato beats Lewis by 2 shots at Evian
By 로컬편집기사
Published : Jul 25, 2011 - 18:11
Updated : Jul 25, 2011 - 18:11
EVIAN-LES-BAINS, France (AP) ― Ai Miyazato clinched her first title of the year at the Evian Masters on Sunday and pledged to share her prize money with the people still suffering in the aftermath of the disasters back home in Japan.

Miyazato shot a 2-under 70 to protect her two-shot lead and hold off a surge from Stacy Lewis of the United States, the Kraft Nabisco winner who missed a golden chance to even the scores on the 16th hole. 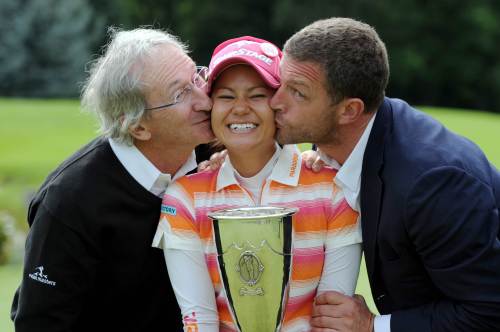 Japan’s Ai Miyazato is kissed by Franck Riboud (left), chairman and CEO of Groupe Danone, and Jacques Bungert, director of the Evian tournament, after her victory. (AFP-Yonhap News)
The 26-year-old Miyazato will now donate at least part of her $487,500 first prize to the relief efforts in Japan.

“I haven’t decided yet, whether it will be all of the amount or some of it,” she said. “This year I was playing for Japan.”

Miyazato played with consistency throughout the tournament, dropping shots on just five of the 72 holes overall and finishing with a 15-under total of 273. Lewis also shot a 70 to finish two shots back in second, with a trio of players another stroke behind.

“It feels amazing, this is my favorite tournament so I’m really happy that I could win this again,” Miyazato said. “Especially (because) right now, Japan’s having a tough time. So I am just really happy to bring some happiness to Japan.”

Miyazato had not won a title since the Safeway Classic last August, and she now has seven LPGA titles overall. She won her first at Evian in 2009, and added five more last year.

“There was so much happening at the beginning of the season, to be honest,” Miyazato said, referring to the earthquake and tsunami that hit Japan in March. “I always have Japan in my thoughts, it gives me motivation to play.”

Miyazato raised both arms in the air after she sank her winning putt, and several players ran on to the green to soak her with water.