South Korea’s Finance Ministry and the central bank held their first meeting to share views on macroeconomic policy on Monday in Seoul, pledging to help coordinate government initiatives to tame inflation, though skepticism lingers about the motive behind the meeting.

“Inflation is a common issue confronting the whole world and it started from the supply side through such factors as oil price hikes and climate change, but now demand-side factors are also exerting pressure,” said Lim Jong-yong, vice finance minister who participated in the policy consultation meeting that is to be held monthly. 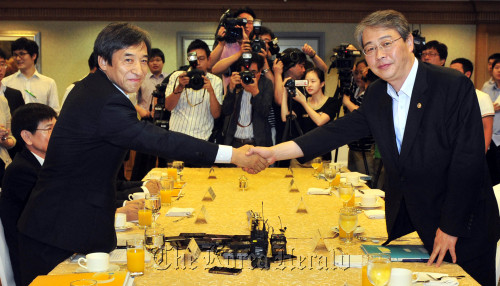 Lee Ju-yeol (left), senior deputy governor at the Bank of Korea, shakes hands with Lim Jong-yong, vice finance minister, at the first policy coordination meeting held at the Korea Federation of Banks in Seoul on Monday. (Kim Myung-sub/The Korea Herald)
Lee Ju-yeol, senior deputy governor at the Bank of Korea, who joined the meeting, stressed the need for such consultation among state agencies: “As demonstrated in the cases in other countries, the cooperation between the government and central bank is being strengthened in the wake of the global financial crisis.”

Lee said the first consultation meeting with top officials from the Finance Ministry is “very meaningful” at a time when inflation pressures are building up amid heightened concerns about economic uncertainty across the world.

The first regular meeting between the two powerful state-run agencies comes as the nation faces rising prices. The central bank recently revised its 2011 consumer price forecast from 3.9 percent to 4.0 percent, with the inflation figures steadily going up in recent months.

Although the meeting is officially aimed at sharing information on economic trends and risk factors, market observers expressed concerns that the central bank is losing its status as an independent organization, particularly because of mounting pressure from the Finance Ministry.

“There is nothing wrong with the idea of setting up policy coordination meetings between the central bank and the finance ministry,” said an economist who asked not to be named.

“But this type of meeting does not help restore public confidence in the central bank’s independence considering that the vice finance minister already takes part in the BOK’s monthly rate-setting meeting,” he said.

The vice finance minister has been joining the Monetary Policy Committee as an observer since January last year, despite an outcry from the central bank’s labor union that such a move undermines the BOK’s independence in setting its monetary policy.

BOK Gov. Kim Choong-soo himself is seen as a close confidante of President Lee Myung-bak, as he had served as a presidential economic adviser in 2008.

The government is also yet to appoint a member for the missing position at the Monetary Policy Committee. The crucial seat at the seven-member committee went vacant last April, but there is no sign that the government is looking for a candidate for the post. The government’s refusal to fill the seat is interpreted as a move to weaken the central bank’s voice in setting the monetary policy.

The Finance Ministry earlier clarified its stance that its vice minister will continue to take part in the BOK’s policy-setting meeting in addition to the newly launched monthly consultation meeting between the top division chiefs at the two agencies.