PYONGYANG, North Korea (AP) -- As his right hand grips the mouse, the physics major's eyes are fixed on a flat-screen monitor labeled with a red sticker reminding him the computer was a gift from Kim Jong Il. 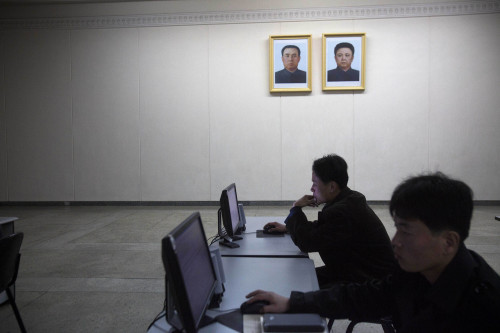 People work on library computers at the Grand People's Study House in Pyongyang, North Korea. North Korea is undergoing a digital revolution of sorts, even as it holds some of the strictest cyberspace policies in the world. (AP-Yonhap News) 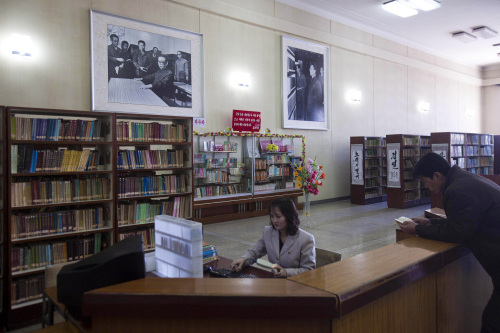 A woman works on a library computer at the Grand People's Study House in Pyongyang, North Korea. (AP-Yonhap News) 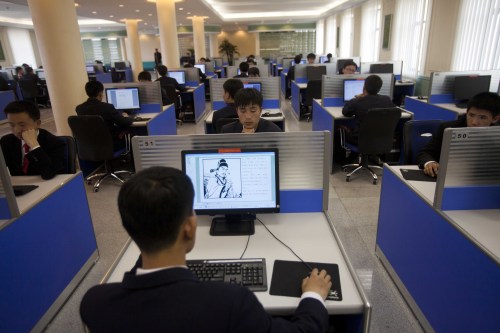 People work on library computers at Kim Il Sung University in Pyongyang, North Korea. (AP-Yonhap News)
Kim Nam Il says he prefers learning online to studying from books, and in that sense, the 21-year-old is just like other university students the world over.

North Korea is undergoing its own digital revolution, even as it grapples with chronic shortages of food and fuel. It is still among the most isolated of nations, with cyberspace policies considered among the most restrictive in the world. Yet inside Pyongyang, there is a small but growing digital world, and a whole new vocabulary to go with it: CNC, e-libraries, IT, an operating system called Red Star and a Web portal called Naenara.

In a world ever-wary of the unpredictable nation's motives, some see in North Korea's bid to train a generation of computer experts the specter of hackers launching attacks on the defense systems of rival governments. Others see the push to computerize factories and develop IT expertise as a political campaign designed to promote Kim Jong Un, the reputedly tech-savvy, Swiss-educated son being groomed to succeed his father as North Korea's next leader.

The country remains one of the hardest to penetrate by email, phone, or Internet. Still, there are signs of curiosity about the wired world outside.

Interest in computers and technology is not new for North Korea. According to local lore, leader Kim Jong Il once said there are three types of fools in the 21st century: those who smoke, those who do not appreciate music and those who cannot use computers. At the close of a historic 2000 meeting with then-U.S. Secretary of State Madeleine Albright, he asked for her email address.

North Korea's biggest IT hub, the state-run Korea Computer Center, has been around since 1990 and has expanded across the country and into Germany, China, Syria, the United Arab Emirates and elsewhere, according to the company.

Since then, North Korean IT firms have quietly developed software for banks in the Middle East, applications for cell phone makers in Japan and South Korea and even video games for Nintendo and Playstation, said Paul Tjia, a Dutch IT consultant who has been working with North Korean companies for years.

The U.S. bans the export to North Korea of luxury items such as iPhones and iPads. But North Korean programmers working for Nosotek, a software joint venture in Pyongyang managed by Westerners, have developed games for Facebook, the iPhone and iPad, Wii and BlackBerry, company president Volker Eloesser said by e-mail.

Computer use does not appear widespread yet in North Korea, where power is scarce and most of the country remains analog. It still is the domain of the privileged in Pyongyang, and aside from top government officials, most have access only to the country's internal Intranet network, not the strictly allocated global Internet.

But inside the cocoon of computer labs and IT centers, young North Koreans are well-versed in programming, Tjia said.

``The knowledge available in the country is in many cases up to the Western level,'' he said, adding that those who need extra training are routinely sent to India and other countries.

Increasingly, North Korea is getting on the World Wide Web.

Flag carrier Air Koryo does not have a website, but it does have a Facebook page with 1,200 fans and engages in lively, humorous discussions with followers while dispensing advice on travel and visas.

``You kidding right?'' Air Koryo responded. ``There are many things to do before even looking at `Online check-in' such as actually creating a website.''

Strengthening science and technology to build up the economy has been a national creed and government mission since the countdown began in 2009 toward the milestone 100th anniversary of national founder Kim Il Sung's birth.

A new, often-cited slogan has emerged: ``Breaking through the cutting edge.'' And in this year's New Year's editorial, the government emphasized the importance of science and technology in this ``IT era.''

Last year, references to ``CNC,'' computer numerical control, began popping up regularly in state media, on propaganda posters, on T-shirts and in the latest rendition of the Arirang mass games. Everything from pencils to sandals are being churned out at top speed, thanks to CNC, according to state media.

It even has its own ode: ``Song of CNC,'' said Kim Hyang, a guide at the Three Revolution Exhibition Hall, where products made with CNC are displayed. Asked to hum a few bars, he laughed and demurred.

To the West, computer automation at factories, around since the 1960s, may not seem so novel. But for North Korea, it is a catchphrase for modernization and a rare instance of English creeping into a staunchly Korean vocabulary. It's a word that has a trendy feel rolling off the tongue.

Modern, high-tech, international, cutting edge: they all are virtues befitting a young, little-known future leader who is described as a tech-savvy military genius by his loyalists.

``It gives them something to praise him for,'' said Brian Myers, a professor of international studies who focuses on North Korean propaganda. ``Kim Il Sung came to power as a military legend, and Kim Jong Il did, too. What I would do in their position would be to link (Jong Un) to technical innovation.''

For nearly 60 years, the Korean peninsula has remained in a technical state of war, divided into the communist north and the U.S.-backed capitalist south. Although both sides signed a truce in 1953, tensions persist.

In 2009, unidentified hackers waged a denial-of-service cyberattack on a host of U.S. and South Korean government sites, including those for the White House, Pentagon, presidential Blue House in Seoul and South Korean Defense Ministry. In a simple but effective ploy, the hackers flooded the websites with useless requests, slowing them down or knocking them offline.

A similar but more sophisticated attack this March targeted 40 South Korean government, military and civilian sites, as well as websites linked to the U.S. military in South Korea -- including 14 of the same sites hacked in 2009 attack.

The culprit is difficult to nail down, but North Korea or its sympathizers are likely, Dmitri Alperovitch, vice president of threat research at computer-security software maker McAfee Inc. told The Associated Press.

The purpose: to test the U.S. and South Korean defenses and reaction, a recent McAfee study said.

``Knowing that would be invaluable in a possible future armed confrontation on the peninsula, since cyberspace already has become the fifth battlespace dimension, in addition to land, air, sea, and space,'' the report said.

At the Mangyongdae Schoolchildren's Palace, where students perfect their singing, dancing, taekwondo, calligraphy and drawing, one boy is playing a game that tests his typing skills on a computer that glows beneath portraits of Kim Il Sung and Kim Jong Il. So far, he has 41 of 61 characters right.

Another has Adobe Photoshop open and is working on adding text to a JPEG image. ``There's no Stopping Progress,'' his sentence reads, superimposed on an image of Windows XP.

At the computer lab at the Grand People's Study House, the ornate main library overlooking Kim Il Sung Plaza, every single desk with a Dell computer is occupied, the tap of keyboards the only noise breaking the silence.

Typing in www.yahoo.com on Internet Explorer goes nowhere, but it is easy to find Rodong Sinmun, the Workers' Party newspaper, on the Naenara (``My country'') portal.

At Kim Il Sung University, North Korea's top university, many of the classrooms may not have heat in winter but the building housing a new e-library that opened last year is state of the art.

Students neatly turned out in dark blazers and red ties sit quietly before terminals outfitted with HP computers. They have 2.8 million books from around the world at their disposal online, including English-language textbooks by U.S. publisher McGraw-Hill.

Washington bans the export of computers and software to North Korea from the United States, and Dell policy forbids the export and re-export of its goods to the country. However, both Dell and HP have factories in China, North Korea's main trading partner.

Inside a classroom, students take notes on computers as a lecturer instructs them on Linux programming. On the walls, 3Com wireless routers beam the Intranet throughout the building. The catchphrase on campus is ``roka'' -- short for ``remote controlled'' -- education. Lectures in ``roka'' classrooms can be transmitted in real time across the campus via webcam, said Ryang Myong Hui, a university tour guide.

``For North Korea, IT is one of the hot new topics,'' he said. ``Not because it's new but because it gives new career options, including the option to work abroad and to work for foreign companies.''

He writes emails, plays video games and listens to music online. He spends three to four hours a day at the computer lab, he says.

And then he goes home -- and gets right back online.