OSLO, Norway (AP) _ Anders Behring Breivik said he was a boy when his life's path began to turn. It was during the first Gulf War, when a Muslim friend cheered at reports of missile attacks against American forces.

``I was completely ignorant at the time and apolitical but his total lack of respect for my culture (and Western culture in general) actually sparked my interest and passion for it,'' the suspect in Norway's bombing and mass shooting wrote in his 1,500-page manifesto. 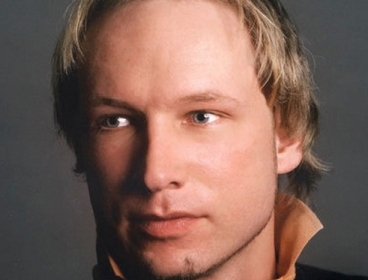 This is an undated image obtained from the Twitter page of Anders Behring Breivik, 32, who was arrested Friday July 22, 2011 in connection to the twin attacks on a youth camp and a government building in Oslo, Norway. (AP)

The 32-year-old Norwegian said it was the NATO bombing of Serbia in 1999 that ``tipped the scales'' for him because he sympathized with Serbia's crackdown on ethnic Albanian Muslims in Kosovo. A year later he said he realized that what he called the ``Islamization of Europe'' couldn't be stopped by peaceful means.

Police and Breivik's lawyer says he confessed to, but denied criminal responsibility for, Friday's bombing at government headquarters in Oslo and the mass shooting later that day at an island summer camp organized by the youth wing of the ruling Labor Party. At least 93 people were killed in the attacks.

Breivik's manifesto chronicled events that deepened his contempt for Muslims and ``Marxists'' he blamed for making Europe multicultural. He suggested his friends didn't even know what he was up to, and comments from several people who had contact with the quiet blond man indicate he was right.

Jack Levin, a professor at Northeastern University who has written a number of books on mass murderers, said the manifesto helps Breivik show himself as more human.

``It makes the killer look like a victim rather than a villain,'' Levin said.

From September 2009 through October 2010, Breivik posted more than 70 times on Dokument.no, a Norwegian site with critical views on Islam and immigration. In one comment, he entertained the idea of a European Tea Party movement.

In December of 2009, Breivik showed up at a meeting organized by the website's staff.

``He was a bit strange. As one could see from his postings, he had obviously read a lot but not really digesting it,'' said Hans Rustad, the editor of the website.

But Rustad said he ``hadn't the faintest idea'' about Breivik's murderous plans.

``Other people have the same views on the Net and they don't go out and become mass murderers. So how can you tell?'' Rustad told The Associated Press.

In the document Breivik styles himself as a Christian conservative, patriot and nationalist. He looks down on neo-Nazis as ``underprivileged racist skinheads with a short temper.''

Part of Breivik's manifesto was taken almost word for word from the first few pages of the anti-technology manifesto written by ``Unabomber'' Ted Kaczynski, who is in federal prison for mail bombs that killed three people and injured 23 others across the U.S. from the 1970s to the 1990s.

Breivik did not cite Kaczynski, though he did for many other people whose writings he used.

Breivik changed a Kaczynski screed on leftism and what he considered to be leftists' ``feelings of inferiority'' _ mainly by substituting the words ``multiculturalism'' or ``cultural Marxism'' for ``leftism.''

For instance, Kaczynski wrote: ``One of the most widespread manifestations of the craziness of our world is leftism, so a discussion of the psychology of leftism can serve as an introduction to the discussion of the problems of modern society in general.''

Breivik called his upbringing in a middle-class home in Oslo privileged even though his parents divorced when he was 1 and he lost contact with his father in his teens. His parents split when the family lived in London, where his father, Jens Breivik, was a diplomat at the Norwegian Embassy in London. A spokesman for the embassy, Stein Iversen, confirmed that Jens Breivik was employed at the embassy in the late 1970s, but wouldn't discuss his relationship with the Oslo suspect.

Breivik said both parents supported Norway's center-left Labor Party, which he viewed as infiltrated by Marxists.

His mother won a custody battle, but Breivik said he regularly visited his father and his new wife in France, where they lived, until his father cut off contact when Breivik was 15. The father told Norwegian newspaper VG that they lost touch in 1995, but that it was his son who wanted to cut off contact.

``We've never lived together, but we had some contact in his childhood,'' the older Breivik, who VG said is now retired in France, was quoted as saying. ``When he was young he was an ordinary boy, but reclusive. He wasn't interested in politics at the time.''

He learned about Breivik's massacre on the Internet. ``I was reading online newspapers and then I suddenly saw his name and picture on the net,'' he told VG. ``It was a shock to find out. I haven't gotten over it yet.''

Breivik's mother lives in an ivy-covered brick apartment building in western Oslo, currently protected by police. Neighbors said they hadn't seen her since a few days before the shooting. Police said they've spoken to her and that she didn't know of her son's plans.

In his manifesto, Breivik said he had no negative experiences from his childhood, though he had issues with his mother being a ``moderate feminist.''

``I do not approve of the super-liberal, matriarchal upbringing though as it completely lacked discipline and has contributed to feminize me to a certain degree,'' he said.

But Breivik claims he never lacked courage: ``If anyone threatened me or my friends, regardless if we were at a disadvantage, we would rather face our foes than submit and lose face.'' He said that attitude was atypical among ethnic Norwegians, who had a tendency to ``sissy out.''

In Internet postings attributed to Breivik on Norwegian websites, he blamed Europe's left-wing parties for destroying the continent's Christian heritage by allowing mass immigration of Muslims.

He said he came in contact with like-minded individuals across Europe, and together they formed a military order inspired by the Knights Templar crusaders. Their goal was to seize power in Europe by 2083 in a string of coups d'etat. Norwegian police couldn't say whether the group existed.

Two European security officials who spoke on condition of anonymity because they were not authorized to speak about the investigation said they were familiar with increased Internet chatter from individuals claiming they belonged to a group called the new Knights Templar.

Breivik said he also tried to get engaged in domestic politics, in the Progress Party, an a populist opposition party which calls for stricter immigration controls. He claims he was a popular party member who almost got elected to the Oslo City Council seven years ago.

``That's just something he imagined,'' said Joeran Kallmyr, whom Breivik described as his ``rival'' in the party.

Breivik attended only five or six party meetings during those two years and left the party quietly, said Kallmyr, now a vice mayor of Oslo.

"He was very quiet, almost shy. He seemed like a well-educated man. He was very well dressed and very polite. He wore a tie all the time,'' Kallmyr said. ``I couldn't see any signs that he was coming apart.''

Kallmyr said he only had one conversation with Breivik, a forgettable chat about Breivik's business. According to Breivik's manifesto, he was the director of Anders Behring Breivik ENK at the time, a business he describes as a ``front'' and a ``milking cow'' to finance ``resistance/liberation related military operations.''

He describes elsewhere in the document how he used his own companies to secure bank loans and credit to fund his attack.

Breivik, who detailed his preparations for the attacks in eerie detail, also anticipated the hostility he would face, even from his friends and family, if he survived his ``mission'' and was brought to trial.

Levin said that part could be part of the motivation for the manifesto.

``He talks about visiting prostitutes and taking steroids. Why would he say such negative things about himself? I think what he's doing is _ this humanizes him,'' Levin said. ``He's trying to tell people he's not a monster, that he's a person with frailties and weaknesses like everybody else.''