Everyone loves a good deal Sejong Belt ―a gathering of 47 theaters, museums and cultural organizations around Gwanghwamun Square ― provides just that; a great bargain, well, actually, 32 of them to be exact.

Combo packages offering up to 60 percent off events are, without a doubt, the main attraction of this cultural hub spearheaded by performing arts giant Sejong Center. 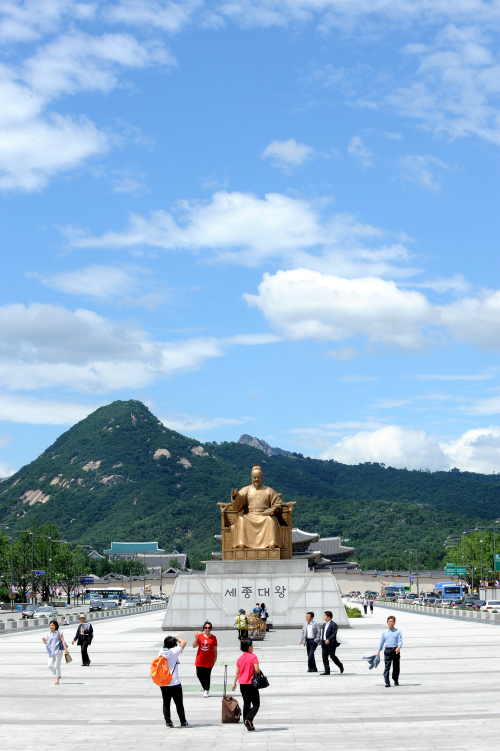 Gwanghwamun Plaza, right outside Gwanghwamun Subway Station Line 5, Exit 9, is the center of the Sejong Belt. The inventor of Hangeul, King Sejong, sits in front of the largest palace of the five built during the Joseon Dynasty, Gyeongbokgung. The verdant Bukak Mountain frames the Joseon king’s statue. (Lee Sang-sub/The Korea Herald)
Theatrical performances act as the mainstay of these package deals, with meals, hotel rooms and exhibitions getting thrown into the mix.

For example, couples can check out the musical “Falling for Eve” and dine at Sejong Center’s Gwanghwamun Artee restaurant complex for only 82,000 won; which is 48,000 won less than it would normally cost.

For the month of July alone, there are 32 such packages up for grabs, so which ones are people nabbing?

According to Rhee Ji-hyun, 31, the consulting manager for Sejong Belt’s ticketing and information center, hit packages are ones for the non-verbal cooking performance, Nanta, and the comedic martial arts show, Jump,

“Nanta and Jump are the most popular amongst both Koreans and foreigners,” said Rhee.

What’s more, this discount doesn’t mean you get assigned seating, you can still pick where you want to sit, says Rhee.

Unfortunately, not everything is as flexible.

The meal ticket you get for Artee doesn’t allow you to pick which of the nine places inside the complex you eat at. For example, right now, you can pick from Italian or Chinese, and the meals are set.

One of the additional bonuses of these packages is that most everything is within a 5-to-20 minute walk from Gwanghwamun Square (where the ticketing center is located), allowing people to visit nearby palaces, museums and other sightseeing hotspots in between events.

While this sort of comprehensive theater bargain may be new here, for anyone who has lived in New York, it is not.

For years, TKTS, the city’s set of famous discount booths, has been doling out Broadway and Off-Broadway show tickets at 20 percent to 50 percent off.

Rhee admits that TKTS did serve as inspiration for the Belt, but their package system takes it a step further by including other aspects as well like exhibitions, meals, hotel rooms and even soccer games.

Rush tickets are sold the day of the actual performance and are half off their original price.

S-day only happens once a month, on the last Sunday of every month.

A free shuttle that tours Deoksu Palace, Jeong-dong street and other historical and cultural spots also runs on S-day.

As of now, the shuttle tour is conducted in Korean, but Shin says “in the future we will have guides who speak various languages.”

Sejong Belt currently encompasses Gwanghwamun, Jeong-dong, Insa-dong, and Myeong-dong. A few performances are held in Sinchon and Daehangno. Shin says plans are to expand throughout Seoul.

Sejong Belt Integrated Ticketing and Information Center is open from 10:30 a.m. to 8:30 p.m. daily and is located at Gwanghwamun Subway Station Line 5, Exit 9.

The free shuttle bus departs every 30 minutes from Sejong Center starting at 11 a.m. on “Gwanghwamun S-day.” This month, S-day will be July 31. 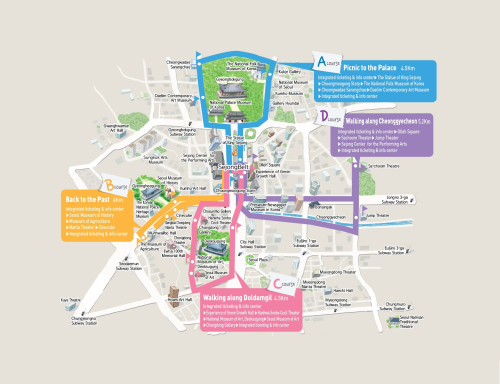 Sejong Belt’s Story Tour Map provides stroll-worthy paths through the palaces, museums and other sightseeing hotspots in the area. Course A, Picnic to the Palace, is recommended for tourists or foreigners looking to acquaint themselves with the historicalriches of northern Seoul. Course C, Walking along Doldamgil, is a picturesque and romantic way to enjoy the quiet beauty of the area and get a sense of the time when coffee culture was just beginning to seep into the former Joseon Dynasty capital. (Sejong Center Sejong Belt)
Sejong Belt In Depth ― Jeong-dong street

Deoksu Doldam road and Jeong-dong street are both interconnected tree-lined lanes that run up from Deoksu Palace past the Seoul Museum of History and Chongdong Theater.

Famed for their picturesque ambiance and storied legacy, they attract visitors looking for a historic stroll through northern Seoul.

Rumor has it if couples walk along Doldam road they end up breaking up, and, on Jeong-dong street, Korea’s first modern cafe opened in a hotel in 1902.

While you can enjoy Jeong-dong road by taking the free shuttle on “Gwanghwamun S-day,” Sejong Belt package users can just as easily stroll along it before popping into Chongdong Theater to watch “Miso” or into Jeong-dong’s Nanta Theatre to check out “Nanta” (both of which are located there).

Here are a few places to visit on or near Jeong-dong street.

It was fate that Jeon Kwangsoo Coffee House opened up an outlet across the street from where Korea’s first cafe once stood.

Jeong-dong shop head Ann Lim, 40, said she was not aware of this at first.

Lim, however, knew of the road’s reputation for being one of the most sought-out strolls in Seoul.

“This street is not bustling or busy, so I felt like it would be a good place to sit back and enjoy a relaxing cup of coffee,” said Lim. “Plus this area is a cultural hub filled with theaters and museums.”

The establishment also brews some of the best Dutch coffee (cold-brewed coffee) in the city.

Brewed for over 10 hours, the Dutch Coffee Holic No. 1 boasts heady, velvety chocolate aromas, lands round on the tongue and ends with a tannic bite. Served up with ice, it is the perfect antidote to a sultry summer day.

To get there go to City Hall Station Line 1, 2, Exit 2 and walk down the road between Deoksu Palace and Dunkin’ Donuts. After passing the Seoul Museum of Art, take the middle fork in the road and walk up it. Jeon Kwangsoo is on the left just past Chongdong Theater.

Deoksu Palace may not be as large and sweeping as Gyeongbok Palace, but it has its own tale to tell.

As the place where Joseon’s 26th monarch ― King Gojong (1852-1919) ― spent his final days, Deoksu bears traces of those turbulent times, of growing Western influences (most apparent in its architecture), and of the end of a dynasty.

Though the Seoul Museum of History is not exactly located on Jeong-dong road, it is a six minute walk from Nanta Theatre and a nine minute walk from Gwanghwamun Square, making it worth a stop if heading from the ticketing office to the theatre.

Aside from being air-conditioned (a boon in this hot weather), admission is free.

Visitors can witness the development of Seoul from a Joseon Dynasty capital into the urban destination it is today.

Everything from delicate crafts made by Joseon Dynasty women to a model of the current cityscape is on display.

Children can get a hands-on history lesson on traditional Korean culture at the History Lab Learning Center and Touch Museum stations.

The Seoul Museum of History is open from 9 a.m. to 9 p.m. on weekdays, till 7 p.m. on weekends through October and is closed Mondays. Admission is free. The museum is near Gwanghwamun Station Line 5, Exit 7. For more information visit www.museum.seoul.kr or call (02) 724-0114.