[ The Korea Herald – Send E-mail ]
Festival
By 로컬편집기사
Published : Jul 22, 2011 - 19:01
Updated : Jul 22, 2011 - 19:01
“The Great Battle of Hansan Festival 2011”: The Great Battle of Hansan (1592) is one of the four most famous sea battles in the history of Korea. Visitors to the festival, which celebrates the anniversary of the great event, will learn all about the battle while enjoying the beautiful natural scenery of Tongyeong in South Gyeongsang Province. This year, the festival will take place from Aug. 10 to Aug. 14 in Jungang-dong in Tongyeong. The festival’s highlight is a magnificent reenactment of the Great Battle of Hansan in which a battle between “Geobukseon,” or Korea’s turtle-ships, and Japanese ships is reenacted out in the ocean. Admission is free. For more information, call (055) 650-4531 or visit www.hsdf.or.kr. 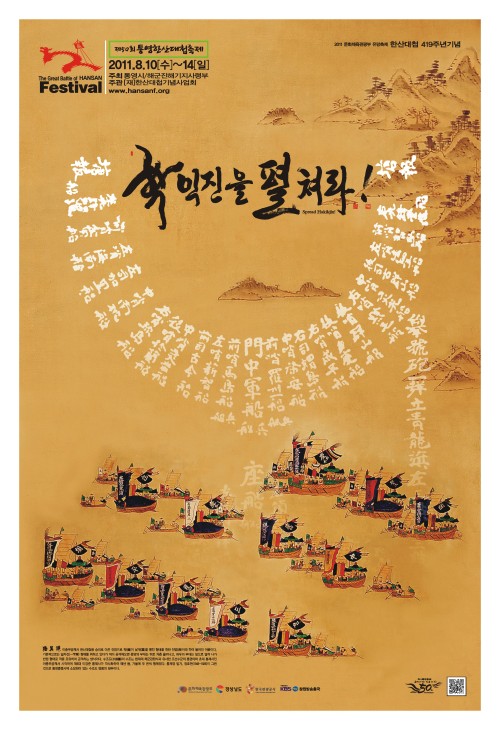 Poster of The Great Battle of Hansan Festival 2011 (Tongyeong City)
“Puchon International Fantastic Film Festival”: PiFan in Bucheon, an extravaganza of visual culture that encompasses movies, cartoons and games, will take place from July 14-24. As one of the most dynamic film festivals in the nation, PiFan has garnered support from moviegoers both at home and abroad. Movies of genres including horror, mystery, thriller and science fiction as well as discussions of film directors on controversial topics will be featured. The event will be at Bucheon Citizens’ Hall, City Hall and Bucheon CGV. For more information, call (032) 345-6313.

“Gangjin Celadon Festival:” Gangjin Celadon Festival will be held from July 30 to Aug. 7 at the Goryeo Celadon Porcelain Kiln in Gangjin County in South Jeolla Province. From the 10th to the 14th century, Gangjin was a flourishing celadon production site. Today, 16 kilns remain active and during the Gangjin Celadon Cultural festival, you can see how celadon is baked and even make your own pottery. Near the venue, there are natural wild flower fields, which make for a great photo spot. Celadon experience programs include shaping celadon and coiling, standing spinning wheel experience. Other event programs include balsam nail polishing and clam digging. Admission fee is 7,000 won. For more information, call (061) 430-3191.