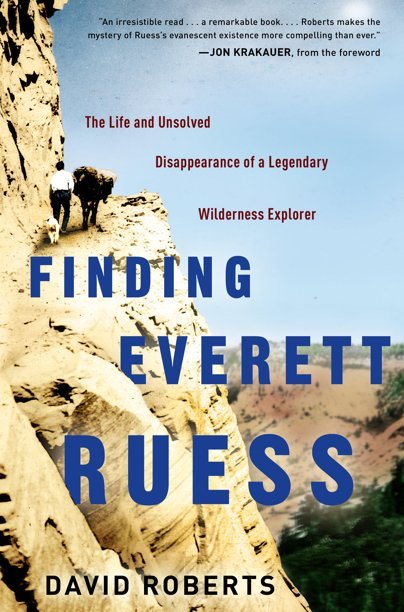 Finding Everett Ruess: The Life and Unsolved Disappearance of a Legendary Wilderness Explorer


Those with a soft spot for adventuresome romantics will find it difficult not to be beguiled by young Everett Ruess after reading David Roberts’ noteworthy book.

A thorough biographer and determined detective, Roberts also explores the reasons that people remain intrigued by the ill―fated artist who disappeared nearly eight decades ago ― a mystery that Roberts convincingly unravels in the final section of “Finding Everett Ruess.”

Ruess was just 20 when he vanished in 1934 while on one of his wanderings in the red rock country of Utah. He had undertaken a handful of such journeys since he was 16, accompanied only by pack animals. He sent a steady stream of letters to his parents and brother in Los Angeles as well as to friends. He wrote of his love of nature, his desire for solitude and his struggle to develop deep friendships while feeling apart from others.

“God, how the trail lures me,” he wrote to his brother, Waldo, in 1932. “I’ll never stop wandering. And when the time comes to die, I’ll find the wildest, loneliest, most desolate spot there is.”

Over the years the mystery gained Ruess a cult following and imbued his writings and artwork with a certain aura. It’s similar to the taken-too-young quality that keeps actor James Dean a figure of fascination and turns another wanderer, Chris McCandless of “Into the Wild” notoriety, into a subject of interest.

“Finding Everett Ruess” contends that the young vagabond may have been a John Muir in the making. Indeed, Ruess’ writings matured with time and experience, and he showed potential to join Muir and other adventurers who became advocates of preserving wild places.

Roberts, while clearly taken with Ruess, doesn’t shy away from recording his subject’s callow qualities and less admirable traits. There is, for instance, Ruess’ occasional disdain for Navajo people and their customs.

Ruess also appears self-absorbed ― he expected his family to support his rambles when they could barely support themselves ― and more than a bit foolhardy. He was so far beyond his survival skills when he entered the wilderness alone that it’s amazing a tragedy didn’t occur earlier.

Innocents who embark on physical and intellectual journeys often captivate us with their moments of self-discovery. Roberts provides a realistic view of this adventurer but still allows us to hear the voice of Everett Ruess in all its tones of youth, passion and wonder.