“The hardest part was not putting in too much history,” the Capitola resident said. “You don’t move the story along like that.”

Her mystery novel, “Murder in the Pines,” still packs in a lot of historical references, and much of the plot revolves around real events. 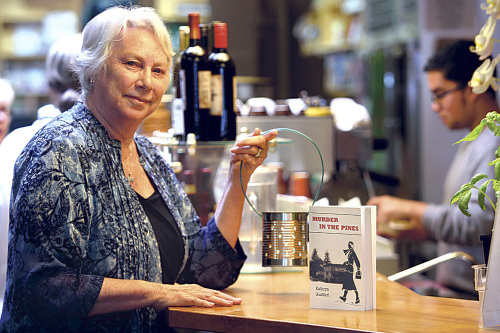 Depot Hill resident Kathryn Gualtieri will talk about her first mystery novel Thursday, at the Capitola Book Cafe in the city of Capitola, California. (Dan Coyro/Santa Cruz Sentinel/MCT)
Gualtieri drew on her experience as the state historic preservation officer and chairwoman of the State Historical Resources Commission.

Her only previous book is the nonfiction historical work “Half Moon Bay: Birth of a Coastside Town.”

“Murder in the Pines” takes place in 1920s Carmel, Calif., and the murder mystery is based around the arrival of a wealthy East Coast developer who wants to build a hotel on the seaside town’s pristine beach, much to the chagrin of some locals.

The main character is Nora Finnegan, a cub reporter for the Carmel Pine Cone, the town’s real-life newspaper that was founded in 1915.

Gualtieri wrote book reviews and other features for the Pine Cone and also served on the city’s Historic Preservation Committee for four years.

“Just like in my book, the first publisher of the Pine Cone was pro-growth and supportive of business,” Gualtieri said. “The issue of development was very big in Carmel at the time.”

In addition to the underlying theme of development proponents versus conservationists, the book also explores the changing status of women in the 1920s.

The main character must fight with her editor for the chance to cover more hard news, and continually encounters sexist attitudes.

Gualtieri is passionate about history, but mystery writing as well. She is a former member of a Capitola mystery book club, rattles off mystery authors she admires and gushes over the pacing of John Grisham’s novels.

“I like mysteries because you can tell a good story, bring in different sides of an issue, and in the end the audience knows justice will be served,” Gualtieri said.

The first-time novelist said she thought of hiring an agent and looking for a publisher, but in the end decided to complete the process herself. She found an editor and designer, and published the book under her own label, Tin Lantern Publications, an homage to the homemade lanterns Carmelites used to light their way in the 20s, when there were no street lights.

“I spent several years on the book, and at my age I don’t have time to wait for an agent to shop it around,” she said. “This was a labor of love.”

Gualtieri, who retired and moved to Capitola 20 years ago, added that she is not finished yet, and plans to write more mysteries with Nora as the main character.

“One thing I do know, (Nora) will continue as a single professional,” she said. “There is no way she is getting married.”