Now, 16 years after Yun’s death, the 75-year-old Dutoit is working to realize a dream inspired by his friend: an inter-Korean youth orchestra.

The Swiss maestro held talks in North Korea late last month and says cultural officials there support the idea. South Korea says it’s willing to review the plan. Dutoit hopes to hold an inaugural concert on Aug. 15, the anniversary of a then-unified Korea’s liberation from Japanese colonial rule in 1945. 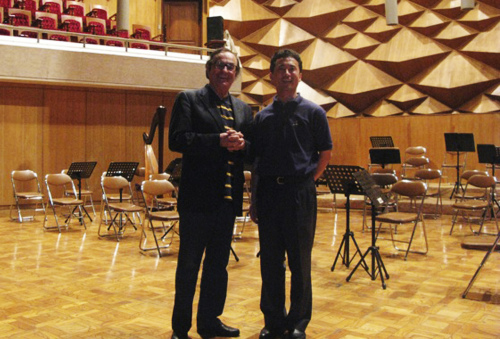 Charles Dutoit (left), the chief conductor of the Philadelphia Orchestra, with Kim Min-song, the conductor of the Chamber ensemble of North Korea, pose at the Isang Yun Institute in Pyongyang. (AP-Yonhap News)
Nearly 60 years after the Korean War ended with a fragile armistice, the two Koreas are technically still at war. Despite the animosity, analysts say both Koreas could find it difficult to reject such an apolitical event organized by a non-Korean, as neither side would want to be blamed for making ties even worse.

“There is a 50-50 chance for this orchestra project being realized,” said Haksoon Paik, a North Korea analyst at the Sejong Institute, a think tank near Seoul.

Dutoit, who conducted the North Korean state symphony on his visit, said he was further inspired by a teary-eyed airport farewell from orchestra members.

“They just didn’t (want to) let me to go,” he said in a telephone interview from Switzerland. “They wanted to keep me a little longer.”

The experience “made me think it would be wonderful to have some little adventure and music together and go over all the problems,” he said. “I have to do music to put together these people and to have more comprehension between them.”

He says his motivation comes from Yun, one of a handful of figures respected in both Koreas.

Yun became world famous in the late 1960s when he was kidnapped by South Korean agents in Germany after an unauthorized trip to North Korea in 1963. He was sentenced to life in prison but was released and returned to Germany two years later following protests from around the world.

Yun, who became a German citizen in 1971, visited North Korea periodically but was never allowed to return to the South. He died in Germany at age 78 in 1995.

The avant-garde composer, known for about 150 pieces combining Eastern and Western traditions, believed an inter-Korean orchestra could ease animosity.

Dutoit conducted Yun’s work and often heard his friend speak of Pyongyang, the North Korean capital, and a music institute there that was named after him.

He first visited Pyongyang in 2002 and was impressed with the skill of the musicians at the institute as they played one of the late composer’s works.

Several years later, Dutoit was a director for a music festival in Seoul, where he shared with organizers his dream of forming a joint youth orchestra.

The project was set back as tensions rose after North Korea torpedoed a South Korean warship and killed 46 sailors in March of last year. The North also fired artillery shells on a South Korean border island in November that killed four people.