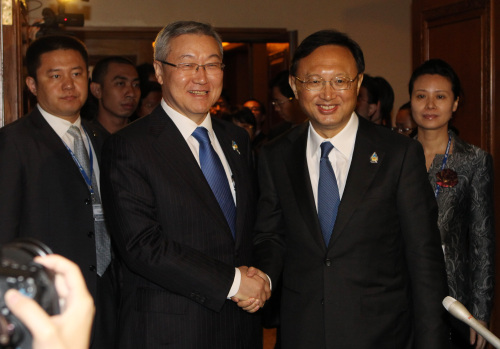 South Korean Foreign Minister Kim Sung-hwan (left) shakes hands with his Chinese counterpart Yang Jiechi ahead of their meeting on the sidelines of the Association of Southeast Asian Nations meeting in Bali, Thursday. (Yonhap News)
The South Korean foreign minister held talks for about 40 minutes with his Chinese counterpart Yang Jiechi on the sidelines of an ASEAN meeting on this Indonesian resort island of Bali.

“During the talks, the Chinese minister expressed his support for the principle that an inter-Korean dialogue on a nuclear-free Korean Peninsula should be prioritized before the resumption of the six-party talks,” said Seoul’s Foreign Ministry spokesman Cho Byung-jae.

“The two sides also agreed to continue to cooperate with each other in their efforts toward a dialogue with North Korea,” Cho said after the talks.

Multilateral negotiations on ending North Korea’s nuclear program have been stalled since late 2008. The talks group the two Koreas, the United States, China, Japan and Russia. South Korea, the U.S. and other regional powers are pushing to reopen the six-party talks in a three-step approach in which North Korea will meet with South Korea first and then the U.S. for one-on-one talks on denuclearization before resuming the multilateral process.

During this week’s ASEAN Regional Forum, Kim said he is seeking to hold an informal meeting with his North Korean counterpart Pak, who is scheduled to arrive in Bali later Thursday to attend the annual forum.