“The GNP, together with the government and Cheong Wa Dae, will work actively to increase the proportion of people-friendly budget items next year,” he said.

“The party’s policy committee chairman and the finance minister will be leading the related discussions.” 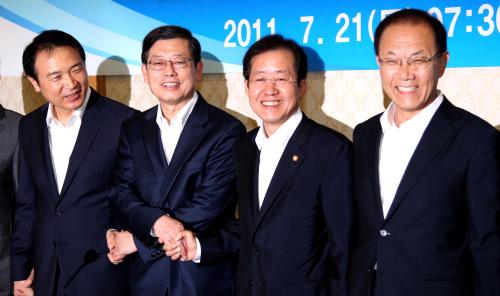 The Grand National Party floor leader Hwang Woo-yea (from right), chairman Hong Joon-pyo, Prime Minister Kim Hwang-sik and Presidential Chief of Staff Yim Tae-hee attend the ruling party-government meeting held at the National Assembly on Thursday. (Yonhap News)
Officials also pledged to promote universal welfare, with their focus on university tuition fees and unemployment, and to attain price stability during the remaining second half of this year, the spokesperson said.

In regard to the 2018 PyeongChang Winter Olympic Games, the government requested a budget increase and law revision, on which Hong promised to cooperate.

The list of attendees included the prime minister, Special Affairs Minister Lee Jae-oh, Finance Minister Bahk Jae-wan and seven other ministers. Only the knowledge economy minister had to be represented by the vice minister.

Cheong Wa Dae also sent most of its top officials, including presidential chief of staff Lim.

Hong, shortly after being elected party leader, pledged to hold all government meetings in Yeouido, the location of the National Assembly, hinting at his determination to keep some distance from the presidential office and the Cabinet.

“No matter how many policies the Lee Myung-bak administration suggests, they shall be meaningless unless conjunctly backed by the parliament,” Hong said in his opening speech on Thursday, underlining the role of the ruling party in state affairs.

“Though there have been doubts about our directions, I believe that we may win the people’s trust and support, should we have confidence and do our best for the sake of the country.”

The prime minister agreed with the people-friendly policy stance adopted by the ruling party and promised to make them the government’s top priority issue.

Yim said that the ruling party, government and the presidential office are all in the same boat and need to cooperate closely.