The Indians were more than happy to let the big right-hander work whatever way he wanted to.

Lou Marson hit a tiebreaking solo homer in the seventh inning and Cleveland completed a doubleheader sweep with a 6-3 win over the Minnesota Twins on Monday night, starting this important four-game series with a pair of victories at sweltering Target Field.

“It was well worth it, all the heat and all the hours at the ballpark,” Indians manager Manny Acta said. 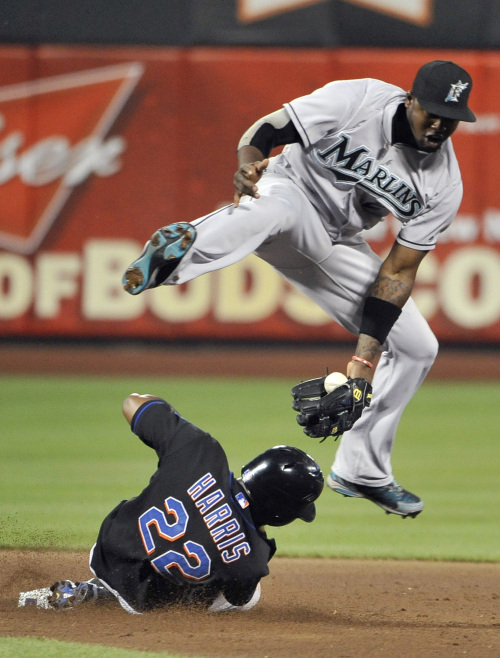 The New York Mets’ Willie Harris slides under a leaping Florida Marlins shortstop Hanley Ramirez in the fourth inning. (AP-Yonhap News)
Marson also doubled and scored in the fifth against Scott Diamond, who turned in a decent major league debut for the Twins but took the defeat.

Carmona (5-10) came off the disabled list and won for only the second time in his last 12 starts, beating the heat to finish six innings with two runs allowed.

Returning from a strained right quadriceps muscle, the former All-Star took a big step toward turning around his so-far disappointing season.

“He’s a guy with great stuff,” said teammate Travis Hafner, who had two hits and two RBIs in the second game.

“He’s one of the leaders on this team, so if he can pitch well it’s a huge boost for our club.”

Asdrubal Cabrera hit a three-run homer to lift the Indians to a 5-2 win in the matinee and added an RBI single in the nightcap. Michael Brantley finished with five hits, three in the evening, on one of those days when scorecards worked better as personal fans and faces glistened in sweat.

That included Carmona, who changed his cap and shirt between each inning.

Despite the discomfort, Carmona was determined to take his time between pitches. Acta said he was concerned at first by the heat, but reassurance from pitching coach Tim Belcher helped the manager relax.