[ The Korea Herald – Send E-mail ]
Samsung’s mobile chief bullish on smartphones, tablet PCs
By 신용배
Published : Jul 18, 2011 - 19:14
Updated : Jul 18, 2011 - 19:14
Samsung Electronics Co. is expected to outdo its smartphone sales target this year, with the popularity of its latest Android devices and upcoming bada phones, which run on its own mobile software, and a ramp-up in low-cost smartphones, Samsung’s mobile and camera chief said Monday.

The world’s second-largest maker of mobile phones, which competes with Apple Inc.’s iPad in the tablet PC sector, is also bullish that its new versions of the Galaxy Tab will spur the growth of the tablet ecosystem and help the company catch up with the application-rich iPad, said Shin Jong-kyun, president of Samsung’s mobile communications and digital imaging. 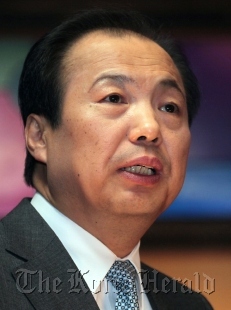 Shin Jong-kyun
“We will likely sell more than 60 million smartphones this year,” Shin said in an interview with the Yonhap news agency in his office in Suwon. “The Galaxy S2 has been well-received not only in Korea, but also in Japan, Europe and other regions, and responses to other smartphones have been positive as well.”

“For the first time, Samsung’s cell phone sales will top 300 million this year. It is a very meaningful and important event,” he said. “To meet the goal, Samsung should manufacture and sell 1 million phones on a daily average and secure components for 1 million handsets every day, which isn’t an easy task.”

Part of its strategies is to boost its smartphone lineup outside Google Inc.’s Android system, including handsets running on its own proprietary mobile software, bada, and Microsoft Corp.’s Windows-based phones, Shin said. Samsung will release more “noteworthy” bada smartphones during the rest of the year, with some of them to be featured during a September trade show in Berlin.

It will also raise the production of low-cost smartphones as mid-range smartphones are replacing low-end cell phones that cannot surf the Web or download applications. Shin forecast that mass-market smartphones will become available for as low as $150 and Samsung will try to advance into that price bracket before December.

Under Shin’s leadership, the electronics giant nimbly transformed from a smartphone laggard into a leading player in the highly profitable, fastest-growing segment of the wireless market in a mere year.

Fueled by the launch of the Galaxy S2 smartphone in April, Samsung shipped nearly 20 million smartphones in the second quarter, roughly double the figure posted in the previous quarter, according to an estimate by Lee Seung-woo, a Seoul-based Shinyoung Securities analyst.

Amid the absence of the new iPhone from Apple and Nokia’s move to jettison its Symbian platform, Samsung will most certainly nudge out the Finnish mobile giant to become the world’s top smartphone vendor in the quarter, BNP Paribas analyst Peter Yu said.

But in parlance of Shin, a self-effacing man with the Korean virtue of modesty, the second-quarter was “not bad.” The company is scheduled to disclose earnings on July 29.

As Samsung rapidly gained ground in the smartphone market, Apple upped its ante in a legal battle with the Korean company.

Since Apple sued Samsung in April for “blatantly copying” its products, the two companies, which compete in the mobile market but also has a supplier-client relationship, are embroiled in lawsuits in at least seven countries, including the U.S.

“We do respond (to lawsuits),” Shin said. “But we don’t attack other companies first even though we have a lot of patents.”

Shin, however, declined to elaborate or comment on other patent-related issues, including the on-going royalty negotiations between Android vendors and Microsoft.

Although Samsung’s big bet on Google’s Android helped the company make a splash in the smartphone segment in a short period of time, skeptics said that Samsung’s relatively short experience with mobile software could be a drag on the company’s efforts to close the gap with the iPad in the tablet area.

Samsung was the world’s top Android tablet maker in the first quarter of this year, but it still lagged behind the iPad, which dominates the tablet PC market, according to data from Strategy Analytics.

With a large screen of tablet PCs, consumers will factor software features ― such as the availability of applications and content, and the compatibility with other computing devices ― more into their decisions, they say. Apple’s App Store featured more than 425,000 applications as of July, about twice as many as Android apps, including 100,000 apps for the iPad.

However, Samsung, which released the first Android tablet in October of last year and is scheduled to launch new tablets in two different sizes this summer, believes that as it further ramps up production of Android tablets, the so-called ecosystem, which enriches and defines what users can do with their gadgets, will also grow organically, just like the boom in the Android smartphones preceded the growth of the Android community.

“I think it’s device first,” Shin said. “As more tablets become available in the market, it will stimulate the ecosystem for tablet PCs.”

The mobile president was also confident that the new ecosystem for the tablet PC will evolve at a faster rate than generally expected, as was the case with the Android boom.

Shin added that the tablet PC market is the segment that is poised to post huge growth as the faster speed of the mobile Internet is deployed with the launch of the long term evolution technology.

On the software front, Samsung plans to break into the cloud computing system, following Google, Amazon and Apple, Shin said.

“We have plans. We will respond,” he said without elaboration.