Her impressive presentation on July 6 for PyeongChang’s 2018 Winter Olympics bid not only captured the attention of the IOC voters, but also thrilled millions of TV viewers across the country. Furthermore, the video clip of her English presentation has since become a viral hit on the internet, fuelling “English-fever” here.

“It’s been overwhelming, and also very surprising,” Rah said at the PyeongChang bid committee office in Seoul on Friday.

After returning from Durban, Rah has been busy dealing with interview requests, and also writing thank you letters to the IOC members.

“And I still have jet lag,” she said, smiling before sipping her coffee. 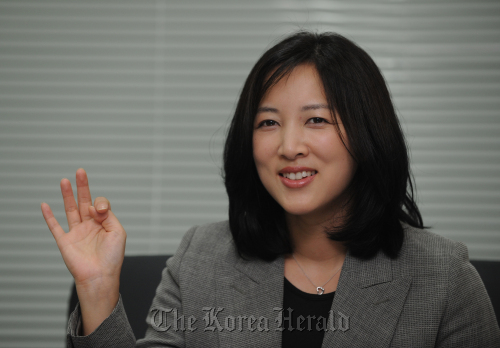 “A lot of people now recognize me on the streets, and thank me. But I’m just glad we brought the Winter Games to Korea,” she said with a big smile.

Rah noted that she believes PyeongChang’s strong final presentation was one of the keys to its success.

“IOC members told me that we won at least 10 more votes because of our strong presentation.”

“At the technical briefing in Lausanne, we did well to deliver our technical plan, but in Durban we had to touch here to get their votes,” she said, pointing at her heart.

To sway the IOC voters, PyeongChang had focused on telling the story of what it could deliver for the Olympics movement, instead what the Olympics could do for Korea, Rah said.

There was no difficulty in getting emotions, but it was actually hard to keep the emotions in check, she said.

“It was easy for us to be emotional, because it was our third bid. We knew that 99 percent people here wanted it. And we really needed it and really wanted it.”

But because of all the emotional memories, Rah said she choked up during her final rehearsal.

“It was good thing, though, that I choked up during the rehearsal, so I knew I had do be careful during the final presentation,” she added.

Rah was the first speaker of the PyeongChang’s panel, and delivered the most part of the final presentation.

“I felt extra pressure, because I knew I had to start strongly to set the right tone,” Rah said, recalling the moment she stood on the stage in Durban.

“When I went up there initially, my mouth was dry, and I really had a hard time getting words out. Then I saw the IOC members, some of them were smiling, that helped me relax.” After the presentation, she felt PyeongChang delivered the best presentation out of the three bidders.

“I’ve seen Munich and Annecy, but they were missing something special,” she said, pointing at her heart once again.

When the IOC president Jacques Rogge said the host city was decided by the first round of vote, there was initial jubilation among the Korean delegates.

“We were quite confident then, but had to keep it cool because we’d been disappointed before. When Rogge turned the envelope around all the emotions we kept suppressed during our long journey came flooding out.”

Despite still being overwhelmed by PyeongChang’s victory, Rah said she was already thinking about her next challenge.

“The response I received after presentation shows there are still big needs out there,” she said, noting that she would now return to her English communication firm to expand her business.

“If I can be a role model helping people communicate better, inspiring more women to go into sports diplomacy, that’ll be my dream.”

Stepping out of the meeting room, Rah said that Kang Kwang-bae, the vice president of the International Bobsleigh and Skeleton Federation, would now set up the first Korean female bobsleigh team.

“I’m interested in the sport. And Kang told me I’ve got the physical ability for it. He could perhaps train me,” she said, smiling again. Asked whether she plans to join PyeonChang’s organizing committee, Rah said: “It’s still too early to speak about that, but for sure I will be in PyeongChang for the 2018 Games.”