Kim, 64, had been an executive director for Pyeong-Chang’s two earlier, failed Winter Games bids. A three-time governor of Gangwon Province, where PyeongChang is located, Kim is a principal figure that launched PyeongChang’s Winter Games project more than a decade ago.

And when the alpine town beat Germany’s Munich and France’s Annecy in an International Olympic Committee vote in Durban, South Africa, on July 6, Kim could barely contain his emotions. 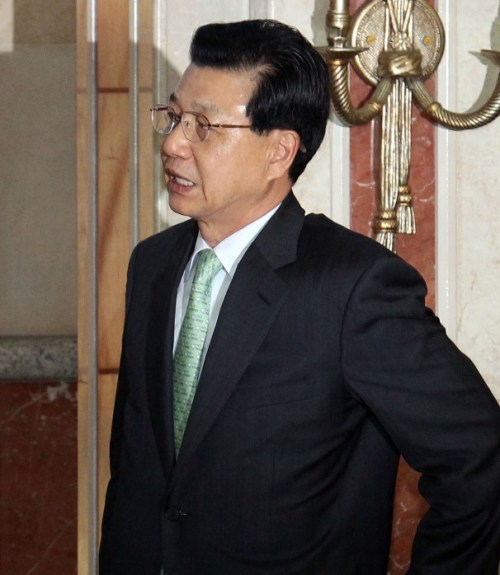 Kim Jin-sun
“The moment the name PyeongChang was called as the winner, I jumped with joy,” Kim said in an interview with Yonhap.

“Then right afterward, memories of all the hard work, put in by not just myself but so many others behind the scenes, came flooding back to me. And I also thought about the tears I’d shed over the two earlier failures. Tears just kept falling down.”

There was another emotional moment earlier. During the final bid presentation, Kim choked back the tears as he told the IOC audience, “I believe it is my destiny to stand before you for the third time.”

Kim said he himself inserted the line into the script because he wanted to make an emotional appeal. “I could highlight it as someone who’d been through so much,” Kim said. “I had to hold myself back because I didn’t want to burden the IOC members with emotions. I tried to focus on delivering the message.”

After his third governor term ended in June 2010, Kim left his post as a co-chairman of the bidding committee, a position he’d shared with Cho Yang-ho, chairman of the local conglomerate Hanjin Group.

But five months later, Kim returned to help PyeongChang as a special ambassador. He had built a strong network with IOC members over the past decade, and he said his relationships with them helped a great deal.

Kim said a combination of different elements, such as a convincing message and improved infrastructure, led to the successful bid. He said he had cautiously expected a win.

“I had long believed that we would have a shot as long as we worked hard and there weren’t any unexpected variables or mistakes,” he said. “On the surface, it was supposed to be a close race, but deep inside, we had our expectations, and they grew bigger as time went on.”

Even so, PyeongChang’s landslide victory ― it earned 63 out of 95 possible votes, against Munich’s 25 and Annecy’s seven ― was a surprise. “The IOC members recognized and supported our sincerity,” Kim said. “I can’t thank them enough.”

Looking ahead, Kim said PyeongChang will be a strong host because South Korea as a country has already proven its acumen on international sporting stages, with the 1988 Seoul Olympics and the 2002 FIFA World Cup, which it co-hosted with Japan. “In terms of economics, human resources and infrastructure, South Korea is more than capable of staging a good Winter Games,” he said. “If we can just execute the plans detailed in our bid file, we won’t have any major problem.”