Ambassador and scientist ― those are the two titles that the new Polish envoy is bringing to an already strong and flourishing bilateral relationship.

“I plan to put a lot of emphasis on developing science and technology cooperation,” said Poland Ambassador Krzysztof Ignacy Majka during his first interview with the local English press.

As a former scientist, Majka sees a lot of potential in fostering academic ties, and plans to use all the instruments within Poland and the European Union at his disposal to achieve his goal.

“Since I have experience as a scientist, I can do a lot in this field,” he said. “It is very close to me.”

Majka is organizing a forum in the not-too-distant future that will examine the rapid advancement of the Korea’s scientific educational system. 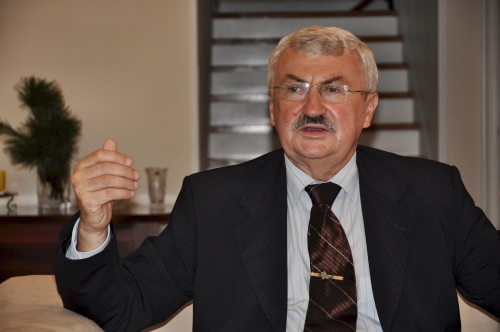 Poland Ambassador Krzysztof Ignacy Majka (Yoav Cerralbo/The Korea Herald)
The Poland-Korea Education and Science Conference will bring together leaders from their field in both countries to better understand and share good practice of Korea’s quick progress in the educational sciences.

“Quite recently, Poland academics completed a report, which was funded by the Polish Rectors’ Fund about the Korean educational and scientific system,” he said.

“There is interest and there are questions which the report wanted to examine.”

Majka will also encourage Korean students and researchers to apply for exchange programs ― there are many opportunities for those looking to expand their studies in Europe and Poland.

The ambassador is also working on another academic summit but with a twist.

He plans to bring together the heads of the Polish study departments in Korea, China and Japan.

“It is a very specialized meeting but at the same time it also falls under building relations and stability of the region through the Polish language,” he said proudly.

At 130 students, Hankuk University of Foreign Studies currently has the most students enrolled in the Polish language program out of all the Asian countries’ universities.

“This is a natural base to build on new initiatives,” he said while looking ahead.

Looking at Majka’s resume, one finds two separate lives, one as a scientist, the other as a diplomat.

From 1979 until 1982 he occupied a junior research position at the Indian Institute of Science, Bangalore under a Polish-Indian Cultural and Scientific Exchange Program.

His stay culminated in the completion of his doctoral degree in Technical Science and he has published approximately 60 scientific works in Poland and abroad and holds various patents.

In 1993 he was appointed as Consul and Head of the Consulate of Poland in Mumbai.

From there he never looked back and continued his career, serving in the Polish Foreign Ministry.

Education is just one facet of the relationship.

Politically, relations could not be better. Both countries have enjoyed visits of the highest level since establishing relations 22 years ago.

Back then, the trade turnover between both countries stood at $125 million. Today, trade has ballooned to $4.7 billion.

“This shows the scale of development of our relations in the economic field,” he said.

“There is a large deficit in favor of Korea but this comes mostly from foreign direct investments of Korean companies in Poland.”

There are 122 Korean businesses in Poland investing about $1.4 billion into the Polish economy.

Majka explained that Poland is highly attractive for Korean companies because of its geographical location, which Majka says is in the heart of Europe.

“We have a young and well-educated workforce. We offer a lot of incentives for investments,” he said.

Also, regional governments offer their own deals that have attracted many Korean companies away from investing in other European countries.

“In 2009, Poland was the only country in the European Union that recorded a positive GDP figure,” Majka said.

“Also, it was one of three countries amongst OECD countries that recorded positive growth.” The others were Korea and Australia.

During the last three years, the Polish economy has grown by almost 11 percent despite the financial crisis that crippled most of the world’s economies.

“All these strengths made it attractive for foreign investments and also investments from Korea,” he said.

He explained that Poland is concentrating on three priorities during its six-month term that closes this year.

They are European integration as a source of growth, Europe’s security, and the bloc’s relations with third countries and the situation outside of the European Union.

Majka highlighted the Multiannual Financial Framework for 2014-2020 will focus on cohesion policies that will diminish the gap between less developed and developed countries.

“The Polish presidency wants to make this policy into an investment instrument,” he said.

Under the six-month presidency, Poland will also look at entering Croatia into the 27-member bloc while opening and closing negotiations with Iceland and keeping negotiations on track with Turkey.

“As far as Korea is concerned, common commercial policy means that we will support the implementation of the free trade agreement,” he said.