The biggest surprise is the list of contenders for the claret jug.

The weather was wild again Saturday, shifting from a raging wind to a gentle sea breeze, from a driving rain to brilliant sunshine, and leaving most of the field wet, tired and feeling as though they got the short end of the draw. That’s not unusual.

More peculiar was seeing Darren Clarke atop the leaderboard after a 1-under 69, his first time in contention at any major in 10 years. Right behind was Dustin Johnson, who was 4 over through the opening 13 holes of this championship and somehow wound up in the final group. 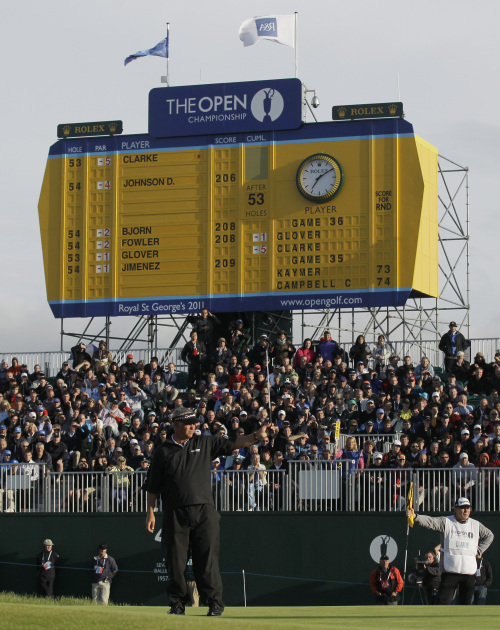 Darren Clarke celebrates after finishing his round at the British Open. (AP-Yonhap News)
Thomas Bjorn, who threw away the British Open eight years ago at Royal St. George’s, was the first alternate at the start of the week and now is only three shots behind. There’s also a 22-year-old who plays without fear and makes it look fun ― only it’s not U.S. Open champion Rory McIlroy, but Rickie Fowler ― “Little Rickie” as they call him in these parts.

Could anyone have predicted these storylines at the start of the week?

“No,” Johnson replied. “I was playing pretty well, but you never know, especially coming into a British Open.”

At least Sunday might be a little easier to sort out.

Clarke escaped the worst of the raging weather Saturday, leaving him far less traffic on his unlikely road to a claret jug.

He was dressed in full rain gear when he walked to the first tee for a third round that had been crowded with contenders. When he walked off the 18th green in short sleeves, he had a one-shot lead and was blinking in the bright sunshine over Royal St. George’s.

There were 44 players within five shots of the lead going into the third round.

“If somebody had given me 69 before I was going out to play, I would have bitten their hand off for it,” Clarke said. “Saying that, we did get very fortunate with the draw. Sometimes to win any tournament, the draw can make a big difference. But in The Open Championship, it makes a huge difference. We got very lucky.”

He also was very good.

Clarke missed only two greens in regulation, and was one of only three players who managed to break par. It was his third round in the 60s, and it put him at 5-under 205 and into the final group of the British Open for the first time since 1997 at Royal Troon.

Johnson, the powerful 27-year-old American, managed to make six birdies on his way to a 68 that puts him in the final group for the third time in the last six majors. The other two aren’t exactly glorious memories ― an 82 to lose a three-shot lead at the U.S. Open last year, a two-shot penalty on the last hole of the PGA Championship when he didn’t realize he was in a bunker.

“I’m going to be pretty comfortable out there tomorrow because I know what to expect, I know how to approach it, and I know what I do in those situations,” Johnson said. “So hopefully, I can go out tomorrow and play some solid golf like I’ve been doing the last few days.”

Fowler was soaked, zipped up in a cream-colored rainsuit for two-thirds of his round, yet it never seemed to bother him. He hung around par during the worst of the conditions ― a remarkable feat ― and when the rain went away, he took off to higher ground. Fowler made three birdies over the last six holes for a 68 and was two shots behind, along with Bjorn (71).

Fowler played with McIlroy, whose hopes ended with a tee shot that went out-of-bounds on the 14th. He shot 74 and was nine shots behind.