Fourteen South Koreans, including Dongducheon Mayor Oh Sea-chang and Pyeongtaek Culture Center head Oh Yong-won, were given the awards in the category of individuals during the ninth GNA ceremony at the Yongsan Garrison in Seoul.

In the organizations category, the Pyeongtaek chapter of People-to-People International Korea, a civilian diplomatic organization, took the honor. 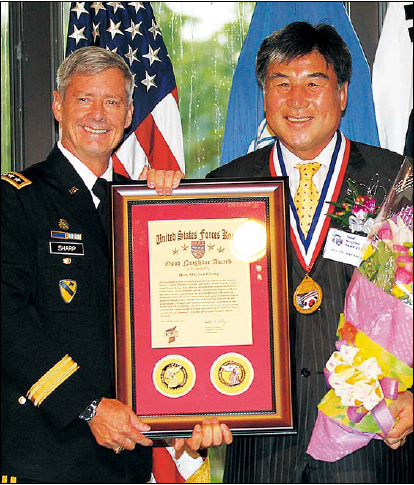 Four U.S. troops including Sgt. Robert Cho received the “Ambassador for the Alliance” Good Neighbor awards in recognition of their efforts to build up friendship with Korean citizens. Cho of the UNC Joint Security Area Security Battalion has taught English to children in his neighborhood.

The USFK has given the annual awards since 2003 as a token of its appreciation to military and civilian personnel who have contributed to good will, mutual respect and understanding.