Big players in global pension funds have gathered in Seoul to discuss future investment plans at the International Pension Conference, which opened here on Monday.

Some 40 heads of 37 public and private pension agencies worldwide have been invited to the three-day event. The asset value of participating pension funds totaled at 3,620 trillion won ($3.4 trillion).

One of the participants is Takahiro Mitani, president of Japan’s Government Pension Investment Fund, the world’s largest pension agency with 1,444 trillion won in asset value.

Along with the jobs left following the 2008 global financial crisis, they will discuss successful investment cases and the outlook of the pension fund industry. 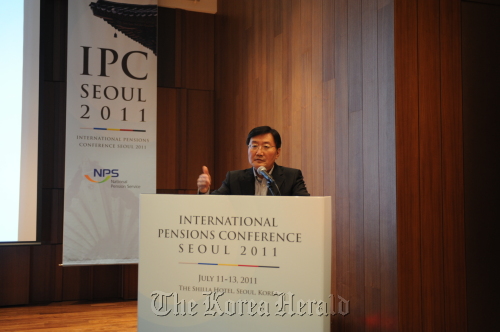 “The IPC Seoul 2011, which will be the place for exchange between global pension fund heads, came in a critical time when the NPS is strengthening its global competitiveness,” said NPS Chairman Jun Kwang-woo.

“I hope the event to become an opportunity to seek progress in the world economy and financial market.”

On the sidelines of the conference, Jun plans to have one-on-one meetings with GPIF president Takahiro Mitani and David Denison, CEO of Canada Pension Plan Investment Board, to discuss ways for joint investment and strategic partnership.

Since its establishment in 1988, the National Pension Service has grown by 30 percent every year.

By diversifying its investment portfolio to include foreign real estate and social infrastructure, officials predicted that its total assets would reach 500 trillion won by 2015 and 2,400 trillion won in 2040.

By 2043, the NPS may become the world’s biggest national pension fund.