Namhae County in South Gyeongsang Province is often called “treasure island,” as there are many things to see, eat and enjoy. Famous tourist sites include Gacheon Village known for having stair-shaped rice paddies, and Boriam, a popular Buddhist temple in Mount Geum. German Village and House N Garden offer exotic scenery as well. The county is at the center of Hallyeo Marine Region, boasting sparkling water and picturesque coastal scenery. 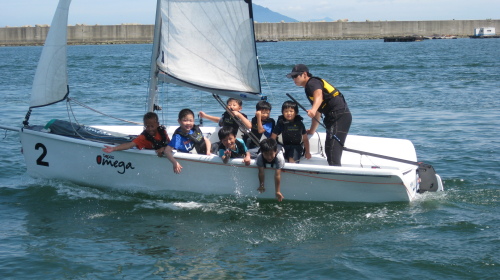 Yachting may be considered as luxurious sports but dinghies for one or two persons, cost about 5 million won.

A yacht school near Mulgeon Port of Samdong-myeon in Namhae offers a brief experience program, a basic course, an advanced course and first-class leader training program for yachting. The education programs have been adopted from the courses of the Royal Yachting Association. Fourth-graders and older are eligible for training courses and the school offers an internationally-accepted certificate of yachting. Two hours of basic training will allow a newcomer to sail outside Mulgeon Port.

If you seek an easier sport, try sea kayaking. Dumo Village, located at the foot of southwest Geumsan, has recently been equipped with facilities for it.

Kayaking is easier than yachting. About one hour’s training will be enough to enjoy kayaking. You can sail for about 20 to 30 minutes from Dumo Village to Nodo, where Joseon-era novelist Kim Man-jung spent his last three years of life.

Daraengi Village, at the southern-most tip of the South Sea coast, has terrace rice patties with 108 steps on a steep hill. Because the hill is so steep, ancient Koreans used to have a saying that even a working ox could fall off the paddies if it didn’t pay attention. At the mouth of the village, Amsu Rock has a legend that a barren woman can bear a son if she prays in front of the rock.

House N Garden near German Village is recommended for couples. The garden offers more than 20 garden styles of different Western countries including France and the U.K. You can try making chocolates with Namhae-produced citron and black garlic. For more information, call (055) 860-8605. (Source: Korea Tourism Organization)

- By bus: The bus between Gangnam Central City to Namhae runs seven times a day and it takes about 4 hours and a half. From Masan, it takes about 1 hour and 40 minutes.