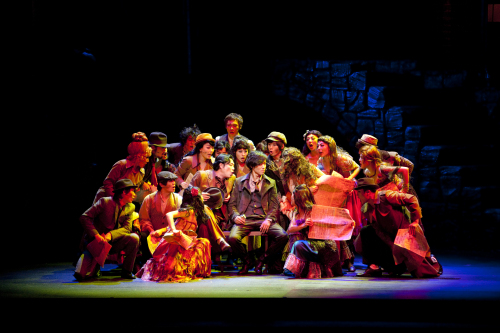 A scene from “Jack the Ripper.” (mmusical company)
“Jack the Ripper”: With a story based on the unsolved murder case in London in 1888, this popular musical is on its third run in Seoul. The star-studded cast includes Ahn Jae-wook, Lee Ji-hoon, Eom Gi-jun and Super Junior’s Seong-min in the role of Daniel, Shin Seong-woo and Lee Geon-myeong for the role of Jack and Yu Jun-sang for the role of Anderson. The musical runs through Aug. 14 at Chungmu Art Hall in Sindang-dong, central Seoul. Tickets range from 40,000 won to 120,000 won. For more information, call (02) 764-7858~9 or visit www.jacktheripper.co.kr.

“How far have you come?”: Yang Hee-eun, Korea’s most iconic folk diva of the song “Morning Dew,” organized the autobiographical musical to celebrate the 40th anniversary of her debut. It looks back on her life from her childhood, her unstable youth up until her life today. About 30 of her hit songs including “Morning Dew,” “Early Morning Road,” “Love, about its Loneliness” and “Seven Daffodils” will be played. The musical will run from July 19 to Aug. 14 at Arko Arts Theater in Daehangno, central Seoul. Tickets range from 80,000 won to 100,000 won. For more information, call (02) 541-7110 or visit www.hanpac.or.kr.

“Spring Awakening”: “Spring Awakening,” which premiered on Broadway in 2006 and recorded a hit in 2009 in Korea, has started its second run. Based in 1891 Germany, the musical tells a story about teenagers who struggle to live a life in a world ruled by adults. It runs through Sept. 4 at Doosan Art Center in Yeonji-dong, central Seoul. Tickets range from 30,000 won to 60,000 won. For more information, call (02) 744-4334 or visit www.springawakening.co.kr or www.doosanartcenter.com.

“Jekyll & Hyde”: Based on the novel “The Strange Case of Dr. Jekyll and Mr. Hyde” by Robert Louis Stevenson, the musical “Jekyll & Hyde” runs through August at Charlotte Theater in Jamsil-dong, southern Seoul. It is one of the most popular musicals in Seoul, and has produced many musical stars like Cho Seung-woo. Tickets range from 50,000 won to 130,000 won. For more information call 1644-0078.

“Audition”: The musical portrays the friendship, love and hope of an unknown rock band. The whole show is like a live concert with the band playing all the music. The musical is steadily becoming more popular since its premiere in 2007 and a decision was made earlier this year to turn it into a movie. Moon Hee-jun, former leader of the popular 90’s K-pop group H.O.T., plays Jun-cheol, the band’s leader. The musical runs through July 24 at Art One Theater in Daehangno, central Seoul. Tickets range from 40,000 won to 50,000 won. For more information, call (02) 762-0010 or visit www.e-eda.com.