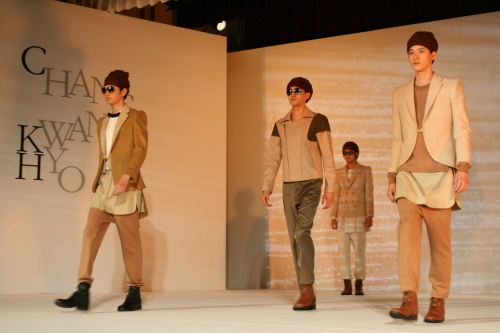 Models show off designs to raise cash for African children at the National Assembly on Tuesday. (IDP)
A fashion show was held Tuesday at the National Assembly to help children in Africa. The event organized with Development Partnership International was to give money raised to charity UNICEF. Korean designer Chang Kwang-ho made around 20 new outfits especially for the charity show. He said he hoped to hold a fashion show each year to get young people more interested in helping Africa’s poorest countries. The event, attended by senior politicians and celebrities, was hosted by assemblywoman Chung Ok-nim to raise awareness of the plight of disadvantaged children. The benefiting program for the United Nations Children’s Fund helps children in the African countries of Uganda, the Congo and Kenya.