SEONGNAM ― Their looks, languages and cultures were different. But it took only a few minutes for South Korean and U.S. Reserve Officers’ Training Corps cadets to become united while training together here at an Army training center on Thursday.

Although they sweated profusely on this rainy but sweltering day, their smiles were incessant throughout as if they tacitly represented the depth of the long-standing alliance, forged in blood during the 1950-53 Korean War.

“I think it is a valuable experience. It gives us a chance to learn, get the perspective of the South Korean Army, and we get to share the perspective of our Army,” Sam Murad, a U.S. cadet and student of Babson College, told The Korea Herald.

“So far, I think the South Korean military is a very professional organization. I have been very impressed.”

They came to Korea last Wednesday for a three-week schedule, organized by the U.S. Cadet Command to help them experience Korean culture. Their two-day visit to the ACC comes as the country celebrates the 50th anniversary of its ROTC program.

“One is to learn more about the Korean culture, so cultural understanding. And the second reason is so that they can develop relationships with Korean cadets of their age to strengthen the ROK (Republic of Korea)-U.S. alliance,” said Doyle who also serves as a professor of military science at University of Portland.

“The U.S. Army realizes that it is very important to have officers who understand how to do cross-cultural communication. They want cadets to experience this as a cadet so, as an officer they are not surprised. This year, approximately 400 students will go around the world to different locations.”

Although he was a little concerned that the hot temperature could affect the cadets’ health, Doyle was happy to see his mentees train alongside their future military counterparts.

“The exercise is not important. Doing it together is important,” he said.

The cadets from the U.S., which stations some 28,500 troops here on the Korean Peninsula, also had a chance to experience home life here as parents of Korean cadets willingly volunteered for the home-stay program.

Excited to see her son making a good foreign friend, Kim Bu-ok prepared some traditional foods for Brett Lamarca, a student of University of Portland.

“I tried to serve a traditional Korean dinner with items that are staples on our table. I hope he likes it,” said Kim, mother of Kim Sung-yun, student of Dongguk University.

“Since Sung-yun doesn’t have any siblings, it seems like he can share a little of the brotherhood experience and make foreign friends.”

Expressing his gratitude for the heart-felt welcome, Lamarca said that he wanted to capitalize on his time here to learn about the Asian ally as much as possible.

“I am just trying to act like a sponge and take everything in. I hope that I can learn as much as possible. That way I can have closer ties or relations for future bonds with the Korean military,” he said.

As they ran and rolled on a wet muddy ground with their arms put around the shoulders of one another, Korean cadets felt as if they had long trained and lived together with their U.S. fellows.

“Though our languages are different, I felt for a reason that I cannot explain that we were on the same wavelength. I want to show the strength of our unity to them,” said Kang Dong-gyun, student of Chosun University. 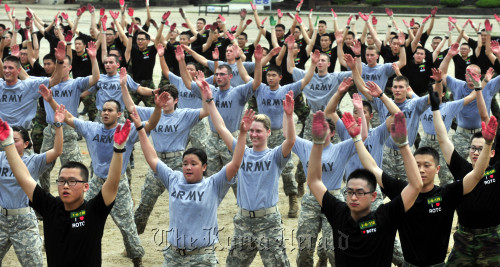 South Korean and U.S. Reserve Officers’ Training Corps cadets engage in a joint physical training session at the Army Cadet Command in Seongnam, Gyeonggi Province, Thursday. (Kim Myung-sub/The Korea Herald)
For Choi Da-rim, a U.S. cadet and student of Stony Brook University, her experience in training with Korean cadets was particularly meaningful as she is of Korean descent.

“I feel lucky as an American-born cadet who is also Korean. As a Korean-American to come here and meet all the ROK cadets here, I feel very fortunate to be here to do the physical training with them,” said Choi.

Watching the mud and rain cover the training suits of all cadets, Capt. Yoon Kyeong-tae, an ACC trainer, felt proud of them.

“While touching each other’s bodies and going through the grueling training courses together, they would build a strong friendship more easily. This is obviously very meaningful for them,” he said.

The U.S. currently has more than 36,300 cadets from some 1,066 universities, according to Doyle. Caucasians account for 70 percents while Asian and African Americans comprise six and 11 percent, respectively.

After graduation, they are obligated to serve for eight years either as active-duty service members, national guards or reservists.

The U.S. also has a Junior ROTC program for high school students, which is aimed at nurturing good citizens. There are currently 290,000 JROTC cadets from 1,688 high schools. On the waiting list are 250 schools seeking to introduce the JROTC.

South Korea currently has 9,063 ROTC cadets from 109 universities. They are to serve in the military for 28 months.