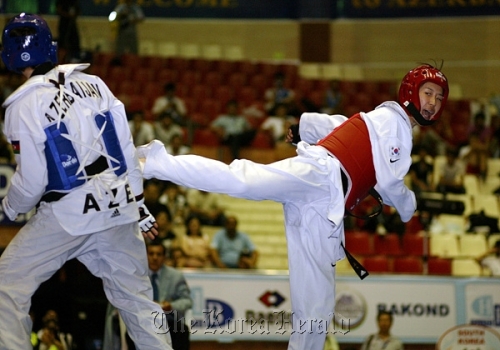 Korea’s Kim Mi-kyung (right) competes against Farida Azizova of Azerbaijan in the women’s under-67 kg final of the WTF World Qualification Tournament for the 2012 London Olympics in Baku, Azerbaijan on Thursday.  (WTF)
South Korea secured two spots in taekwondo for the 2012 London Olympics on the opening day of the World Taekwondo Federation qualification tournament in Baku, Azerbaijan, Thursday.

In the women’s under -67kg final, Korea’s Kim Mi-kyung held off a strong challenge from Farida Azizoya of Azerbaijan, beating the host rival 6-5 for the gold medal to earn Korea’s first ticket to the London Olympics.

The WTF Qualification Tournament, which is taking place at the Sarhadchi Sport Olympic Center until Sunday, has drawn a total of 345 athletes from 108 countries. Twenty-four tickets for the Games are up for grabs in Baku during the four-day competition.

The top three athletes in each of the eight weight categories will qualify their respective National Olympic Committees for a spot for the London Olympics.

The rest of the places will be decided through regional qualification rounds. Asia, America and Europe are each allocated 24 spots for the London Games. Africa holds 16 seats while Oceania has eight places. Four seats will remain wild cards. The Asian qualification tournament is scheduled for Nov. 4-6 in Thailand.