Despite strong protests from some prosecutors, the National Assembly on Thursday passed a disputed revised bill redefining the investigative rights of the prosecution and the police in a bid to meet public demands to reform the prosecution.

The revised bill calls for the prosecution to maintain command over police investigations, the details of which will be determined by presidential decrees, while allowing the police to launch their own probes.

Five high-ranking prosecutors of the Supreme Prosecutors’ Office offered to step down in protest, however, after the parliamentary judiciary committee on Tuesday revised last week’s hard-won compromise in a way that they claim could restrict their rights to oversee police investigations.

The judiciary panel revised it at the last minute to leave details on the prosecution’s command over police investigation up to presidential decrees, not the Justice Minister’s decrees as compromised earlier.

Prosecutor General Kim Joon-gyu vowed to announce next Monday whether he will resign or not, prompting even some rank-and-file prosecutors to follow suit. Kim’s two-year term will end on Aug. 19 anyway. 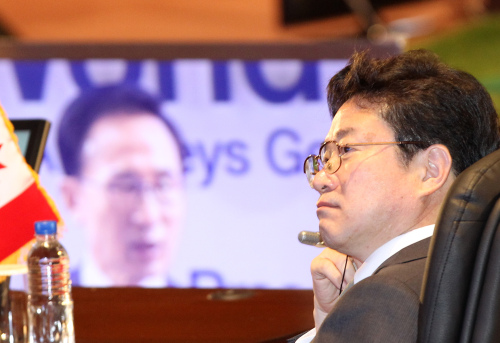 “The prosecution should not look as if they are taking an collective action,” Lee was quoted as saying by his aides earlier Thursday.

“The prosecution should act wisely.”

Lee asked Kim to “show a mature attitude by thinking from the (Korean) people’s perspective,” after giving a speech at an international convention of chief prosecutors held in Seoul on Thursday.

The chief prosecutor said he understood Lee and nodded, according to Lee’s spokesman Park Jeong-ha.

The police, some of who had expressed immediate opposition to the bill, chose to keep calm ahead of the plenary session Thursday.

“I don’t see why the prosecution is making such a big fuss about it when the draft reflects more than 90 percent of what they had demanded,” a police officer in Seoul said.

Members of the police expressed their immediate disapproval of the compromise draft then, saying it does not serve the purpose of reforming the prosecution. Only a clause of Article 192-1 of the law on criminal procedure was revised from “a judicial police officer must conduct investigations under the command of a prosecutor” to “a judicial police officer is under the command of a prosecutor in all investigations.”