The government seeks to convert all paper textbooks into digital versions by 2015, the Education Ministry said Wednesday.

Using smartphones, tablet PCs and smart televisions, school students of all ages will be able to view the content of existing textbooks, ministry officials said. 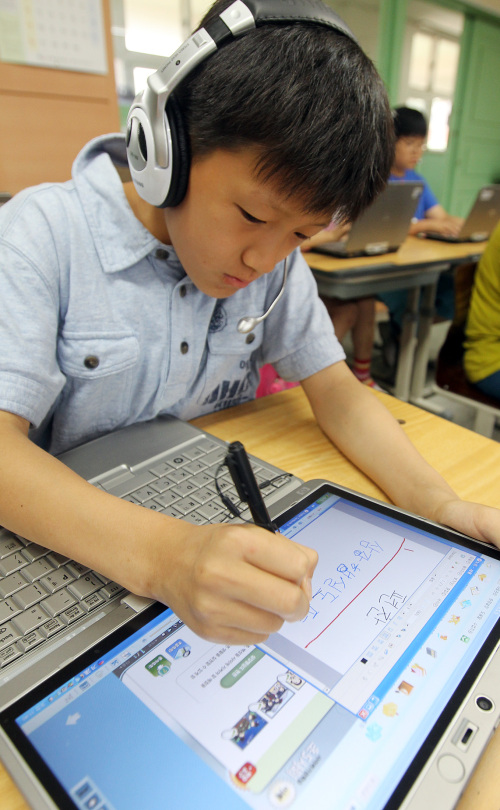 A student writes a note on a tablet computer during a class at a Seoul elementary school designated as a pilot school using digital textbooks. (Yonhap News)
The ministry also seeks to hold nationwide academic tests online, they said.

The ministry and the President’s Council on Informatization Strategies reported this plan on “smart education” to President Lee Myung-bak at the presidential office of Cheong Wa Dae, they said.

In addition to the content of paper textbooks, supplementary materials and two-way study methods will be included in the digital textbooks. Some of the books will be customized to suit the needs of the physically challenged, officials said.

It also plans to begin increasing online classes in 2013 for three years so that those who cannot come to school due to weather conditions or health problems can continue their studies outside of school.

The ministry also plans to encourage students to take the “University-Level Program,” under which students will take college-level courses. Using Internet Protocol Television, it will also run after-school programs to teach foreign languages, multiculturalism and other subjects.

To help teachers handle devices for “smart education,” the government plans to begin training teachers in 2012 ― some 25 percent of teachers each year.

Citing the best score South Korea garnered in an OECD digital reading survey, the Education Ministry believes that the digital platforms will bring about a sea change in the classroom and boost the country’s educational competitiveness.

However, some skeptics said that without any fundamental change in the current university admission policies that have triggered cutthroat competition among students and bloated the private education market, there will not be any meaningful improvement in classrooms.

The ministry announced Wednesday that South Korea ranked first in the 2009 Digital Reading Assessment, which was included in the Program for International Student Assessment. PISA is a worldwide evaluation of students’ scholastic performance, conducted by the Organization for Economic Cooperation and Development.

In the 2009 DRA, South Korea scored 568 points, far higher than the OECD average of 499. New Zealand and Australia jointly ranked second with 537 points, followed by Japan with 519 points and China with 515 points.