NCsoft, an online game developer, signed a memorandum of understanding with Changwon City at the end of 2010 to set up a new professional baseball team in Changwon, some 400 kilometers southeast of Seoul. 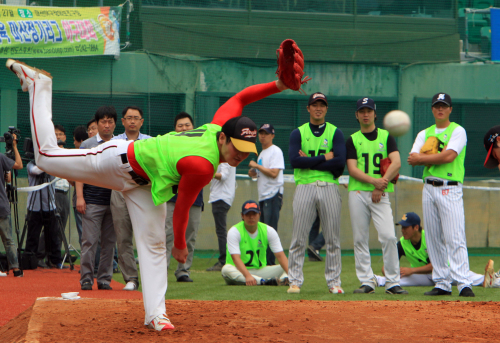 A participant throws a ball during the NC Dinos’ open tryout on Tuesday at the Masan Ball Park in Changwon, South Gyeongsang Province. (Yonhap News)
The city promised earlier to build a new baseball stadium, noting that it would raise the brand value of the city and also boost the local economy.

The plan, however, was rejected twice by the city council with some members denouncing it as “a complete waste of money.”

Things turned around recently when the game developer also promised to support the construction of the new ball park, and the council finally gave the go-ahead to the proposal on Tuesday, despite strong opposition from some members.

Changwon City announced that it will now conduct a special research to decide an ideal location for the new baseball stadium before end of 2011.

Meanwhile, NCsoft, which named its baseball team as NC Dinos, held their first tryout for the 2012 season on Tuesday. More than 200 players have applied for a three-day open tryout, which is taking place through Thursday at the Masan Ball Park. Selected players will go on to the second tryout in September, the company said.

The newly launched Dinos said that it aims to join the second division baseball league from the 2012 season, and hopefully start at the top division league in 2013.

NCsoft received in March its final stamp of approval from the Korea Baseball Organization to establish the league’s ninth team, after garnering majority approval from owners of the eight existing teams.

The game company was one of three local firms that submitted bids to set up a new team, but the KBO noted it was the only team to meet the league’s criteria. The company paid the KBO 5 billion won ($4.6 million) as an entry fee to the league.

The KBO started out in 1982 with six teams and expanded to eight in 1991. Baseball is the most popular professional sport in South Korea. In 2010, the KBO drew 5.9 million fans, its highest number yet.